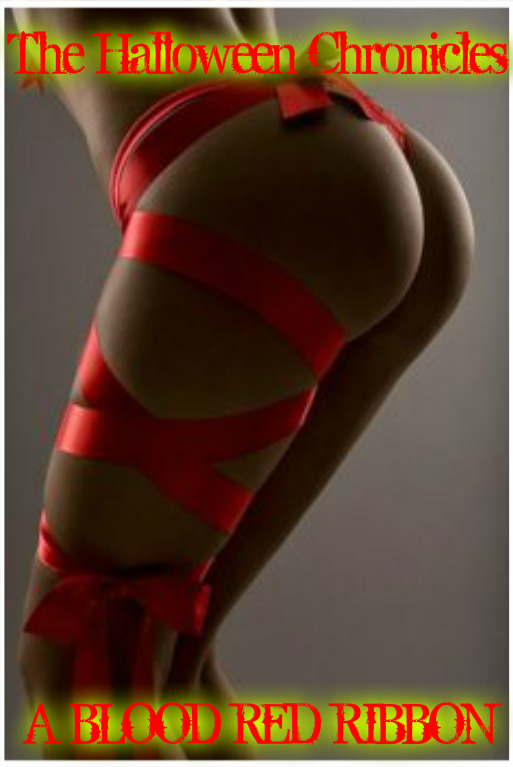 Blood Red Ribbon. WelCUM to another episode of the Halloween Chronicles.    In this Poe-esque story of Love, Lust and Longing over the years…I’ll take you on a journey into the depraved world of Seduction so severe, you’ll wonder why it’s not called torture! Where there’s screaming and bloodletting and divine cruelty, there’s pussy and ass to do the bidding. You are encouraged to sneak off to some quiet room to read this tale of sensual domination.  No need to take your lube with you…the pre-cum is about to flow freely! LOL

His fingers both gripped and caressed her nipples, causing them to becum engorged and bead with tiny droplets of milk. True story; she manipulates her tits so often that they believe she’s given birth. Therefore, she coaxes milk from them at will. He lowers his lips to her lips, then neck, then nipples…all without missing a single well-planned stroke.

Upon further observation, you can see the thick double-faced satin ribbon woven artistically up her thighs to her mound. As he thrust into her, his silhouette became that of a large wolf, but his thrusts remained those of a man. Interesting juxtaposition, don’t you agree? He pounded and pounded until the sound of skin on skin began to sound more like the pounding of raw meat!  And yet, she moaned on in ecstasy.

When you glanced back at the once flesh-toned ribbons upon her thighs, you note the change of color, not caused by the fireplace glow. The ribbons had begun to turn blood red from the pounding of her pussy.  Her moans have ceased and she lies limp but for the thrusts that have slowed, but continue in and out of her swollen pussy. Swelling from the blood flow.

She began to regain her wits and as he continued to fuck her deeply, she reached for one of the blood red ribbons and put it to his mouth, His strokes intensified and she began to squirt her appreciation for all this paranormal fuckery. Clearly, she was no man’s victim. She had entered into this depravity of her own free will.  Bless her. LOL He sucked her life-giving blood from the ribbons and placed them cleaned, back upon her belly as she drifted to sleep.

We meet our host later in the main entry hall. He has consented to allowing slow, quiet walking tours through his chambers for Halloween time. The spectators may even occasionally join in the revelry.  Want to try out to becum one of the party-goers?  Call me for more on the where and how of this Halloween Event.