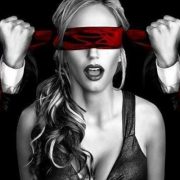 Have you ever attended a blindfolded speed dating event?

First, here’s how it works:

Each woman sits in a private booth and is blindfolded by one of the hosts. Then the men take turns visiting each woman’s booth for a ten-minute date. The men need to try to impress us with their personality instead of their looks or bling. We get numbered scorecards to rate our dates in between sessions, at that point we can remove our blindfold to take some notes. The scorecard has three categories to rate the men on, chemistry, personality, and conversation. But, I decided to include my own category- cock compatibility. My blindfolded speed dating experience just would not be complete without being able to evaluate their cocks.

The first guy was such a dud. He was so nervous, stumbling over his words and when I put my hand on his thigh he practically jumped back. “What are you doing?” he asked. “I need to feel if you’re worth my time,” I responded, even though I knew we were not a good match. He said he didn’t think that was appropriate, so I shouted, “Next!” He got up immediately and walked out. I picked up the blindfold and wrote a big zero on Number One’s scorecard. I was really hoping Number Two would be a lot more fun.

Luckily, Number Two was really funny and charming. When I placed my hand on his crotch his cock was already stiff. He was also perfectly fine with me unzipping his pants and releasing his beast. His impressively sized cock was fully at attention. He moaned as I slowly stroked him. He definitely got high scores.

Then there was Number Three. He had a good personality and was more than willing to whip out his cock for me. It was not nearly as big as the last guy but I still stroked him for a few minutes. He enjoyed it so much he came all over my hand. He got low scores for being such a quickie.

The next three guys were happy to let me stroke them but were nothing special. So far Number Two was in the lead. I was beginning to think this was going to be my first and last time doing blindfolded speed dating. That is until lucky Number Seven came in. The first thing I noticed was how good he smelled and his deep masculine voice was such a turn on. I knew immediately from his confidence that he was extremely attractive. I advanced on his cock more quickly than anyone else. His cock was the biggest and thickest by far! My small hands could barely wrap my hands around it.

Unlike the other guys that sat back and let me stroke them, Number Seven leaned in and delicately kissed my neck. An electric current ran through my body with the feel of his lips. Then he slowly ran his ran up my soft inner thigh. He caressed my pussy over my panties as I stroked him faster and gripped his thick cock even firmer. He kissed me deeply while pressing his fingers in my slippery pussy. This time I was the one moaning. I couldn’t stop myself, still blindfolded, I leaned down and deep throated his impossibly thick cock. I knew I found my perfect match.

A few minutes later, one of the hosts caught us in the act. He asked us to leave and never come back. LOL. That’s ok, I already got what I came for!

How would you like a blindfolded speed dating session with me?

Call me for hot phone sex!