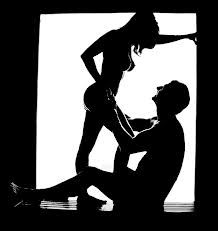 It started with having dinner and him wanting me for dessert. But deciding to make it a night worth remembering, so I took control.  Straddling his torso naked, I told him that a surprise was waiting for him. Sliding my hands up his arms, I tied them to the headboard with my panties. Then reaching over to the nightstand I grabbed his tie and covered his eyes with it.

I leaned over and whispered in his ear, “Do you know how many places I can touch that will drive you crazy?”.  “Like here”, I said as my mouth softly covering his. My tongue slowly tracing his delectable lips. Feeling him flinch, I dived in for more. “Or here”, nibbling his neck and tracing around his Adam’s Apple. Slowly licking up to his neck he moaned.  “Mmmmm isn’t that so much better when you can’t see where I’m going to land my touches next?”, I said as I sucked his ear lobe.

He squirmed underneath me. His hard cock throbbing up against my face.  I could tell he was trying to get me to move down so he could slip his dick inside of me. But I wasn’t ready to give him his good night fuck just quite yet.  Slowly working my ways across his neck I flicked his nipple with my tongue. He gasped and arched his back wanting more.

“You like that don’t you?” I sucked the nipple into my mouth swirling my tongue around it. Twisting the other one in my finger and tugging he squirmed again. Breathlessly, he begged me to stop. But I could tell by the movements he made that he didn’t. Both of them hard now, I raked my fingernails down his chest. I worked my fingertip around one as my right hand slide down further. I knew he thought I was going to stroke his dick now, but I had other intentions.

I worked him good! Teasing him till he was so close then denying him. Pushing to see just how long I could keep him going! But after an hour I finally gave in and let him bust his nut! I took off his blindfold and kissed his lips. When I asked him how was that, he grabbed my face and kissed me so deep and passionately.  He admitted that he had never in his life felt that out of control and so fucking turned on at the same time. I laughed then told him to stroke his dick and get it hard again, because I was just getting started!

Are you ready for me to rock your world?