Lick My Black Leather Boots and Jerk Off At My Feet* 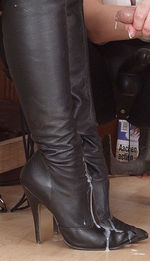 Lick My Black Leather Boots and Jerk Off At My Feet

I found a cute pair of Black Leather Boots at the mall and they look so sexy on me. They have a tall thin heel that just screams “Kinky bitch” and I just had to buy them. I know a lot of foot fetishists would fall in love with them and I knew the one that could appreciate them just as much as I did.

Matt came over and I told him that I had a little surprise for him. He seemed excited but didn’t know what I was talking about until I asked him if he liked my new Black Leather Boots. He looked at them as his smile got wider and told me they looked great. I stood in the middle of the room and pointed to the floor in front of me. “Get down on your knees and lick them if you like them so much.” He dropped to the ground and bent forward, his face right above my boots.
He stuck his tongue out and did a long swipe across the top of one of them. “Good boy.” I murmured and watched as he kept going, licking from the top and over to the sides. Thin wet lines of spit-shined on the leather and not once did he stop for a second. It was so much fun seeing him enjoy this and he moved onto my second boot without me having to ask him. He spent ages on this one, probably because he thought that this was nearing the end and he wanted to make it last.

I let him take his time and he finally came up for air.

He looked at me and the awkward “What now?” moment began. I could see that he had gotten hard and known how things were going to go. So I pressed my toes into his crotch and rubbed them on his bulge. I played with him as he got harder and he held my boot as it moved on him, pressing it down harder. “Now jerk off for me.” He quickly undid his jeans and took his dick out, putting his fist around it.
He kept his other hand on my boot and stroked it while his hand pumped his dick. His hand slid over his shaft with hard, steady strokes and groaned as his fingers moved over my spit covered boots. It’s such a turn on seeing a man kneeling at my feet and doing what I tell him that my pussy got a dull aching throb. “Keep going,” I said and rubbed my stomach, keeping my hand busy as I watched him. He went faster, biting his lip and doing little muffled moans as he pushed himself over the edge.

His fist gave a few last strokes then stopped. He let himself go and put his dick away.  My new Black Leather Boots were covered in cum and there was no way I’d wear them out in public like that so I had to clean them up. Did you think I was going to do that? Yeah, that’s not happening. He started to get up and I said: “Stay.” He froze and tried to not look too eager. I gave him a little kick with my boot and told him that since he was already down there and had proven how good he was at licking things then he should probably keep going. I wanted them spotless.