Banging Big Black Cock I NEEDED a Pounding from a BBC.* 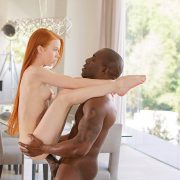 I wasn’t looking for ANY cock the other night, I was in the mood for a Big Black Cock and I planned on having one!

Last night I went out for some drinks with a couple of girlfriends and had all sorts of guys hitting on me. I know they all wanted me but the only one that got my pussy wet was a very sexy and dark guy called Marcus. He was well over 6 feet tall and had rich black skin that looked like velvet. When he was talking to me all I could think about was how big and thick his Big Black Cock must be so I dumped my girlfriends and left with him.

As soon as we got to the bedroom I went after him. Screw foreplay, I don’t need that shit when I got a big Black Cock to throw myself on. I kissed him and pressed my body against his. My hands went to work on his belt, undoing it then taking care of his zipper. I pushed my hand inside his boxers and felt a big semi-hard piece of meat that I could barely get my hand around.

So I stroked him up and down and felt a rush of excitement as he grew in my fist.

He felt huge and must have been pushing 9 inches. I hated letting him go but had to get naked. So I tried to focus on the rest of his hot body. I took off my dress as I stared at his muscular chest. He pulled me down on the bed I stared at his strong black arm against my small white one. He seemed so much bigger than me and I wanted to spend all night in his arms.

His Black Cock was calling me though and I put my hand around the base of it as I slid my tongue over it. I covered him with spit then put my mouth around his head, my lips stretching over the thickness of it. I slid down and only got half of it in but I sucked what I could while my fingers played with the rest of him.

His musky smell filled my nose and my lips massaged his dick as I moved over it.

Marcus shoved my legs open and leaned over me, looking down as he shoved his dick into me. I wish I could have seen that big BBC disappear inch by inch into my tight hole. I groaned as it filled me. Then I could feel him deep inside and there was a throbbing ache in my lower stomach as he started fucking me.

His dick rubbed my walls and I hooked a leg around his waist as it rammed into me.

My pussy was wet and tight around him. My body was pressed into the mattress as he grunted and groaned on top of me. I held him as we moved together. When I came I was so loud I thought the neighbors would call the police.

My pussy felt sore when he pulled out by there was electricity still running through me. There’s nothing like Black Cock and I can’t get enough of it.