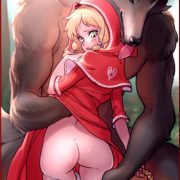 You know the sweet fairy tale of Little Red Riding Hood and the Big Bad Wolf, no doubt.

But I bet you didn’t know she was really a little wicked witch with an unbelievable sexual addiction. You saw a sweet innocent girl who was off to grandma’s house. In reality, she was a witch in training. She was to lure Mr. Wolf to her granny’s house where he would be trapped, beat, and caged for eternity. Her unsuccessful attempts to trap the Big Bad Wolf prompted her to start honing her skills. Over the years, Red mastered her spell casting and on her 18th birthday gained her full powers. As a result, she set out on a quest to rid her village of the Big Bad Wolf. She knew it would take all she had learned about witchcraft, her wit, and patience to enslave the beast.

She stalked the wild animal for days before she came upon his cave.

Knowing when she got his attention, she would have to use her charms and spells to entice him back to the trap. So, she prepared herself and cleared her mind of all thoughts, making sure her powers were at their peak. Then, she started to imagine what it would be like to keep the beast as a pet or a slave. How strong he must be, able to lift and carry large amounts of weight, topple grown men with one swipe of his paw. Did this Wolf have the ability to turn into a man, like a werewolf or a lycanthrope? For instance, Red could shapeshift her body into many different creatures. Could the Big Bad Wolf have the same abilities?

She prepared herself to tame the monstrosity that was the Big Bad Wolf. He would make an excellent addition to her many sex slaves if he could become a man. That’s something else you didn’t know about Red, she’s a sex fiend. She started having a kinky, twisted idea about how it would actually feel to have the Werewolf in his current form between her legs. How would it feel to have his fur up against her silky-smooth flesh? His snarling hot breath blowing between her legs as he lapped at her slick inner walls. She slid a hand in her panties thinking about the Big Bad Wolf nibbling on her, tasting her, sliding his canine cock deep inside her.

She jumped when she felt the Wolf’s breath on the back of her neck.

She felt the Big Bad Wolf’s paws as he mounted her.

Reaching between her legs, she grabbed his dog-like cock, and slid it inside her. Of course, an even louder moan escaped her mouth. The Big Bad Wolf was deep inside Red’s wet cunt, she loved it. As he thrust into her, she started panting like a bitch in heat and rocked back on his beastly cock. Consequently, the Big Bad Wolf howled to the pack. Red heard more paws hitting the ground around them. With a ramming thrust, the musty beast filled Red with his seed.

Red awoke from her dream dripping. She realized it was just a sweet mind fuck and the night of the hunt was upon her. Besides all that, she began to wonder, would she slay the beast or better yet condemn the Big Bad Wolf to her sex slave chamber?

Do you have a beast hiding deep inside? You don’t have to hide your devilish side from me. I was born to be wild and I can tame the animal you have become. Even if you need a leash. Call this wet, wild southern slut for the best phone sex money can buy!