Best Orgasm Ever: Washing My Dirty Linen in Public 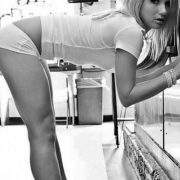 There is a saying in England: “don’t wash your dirty linen in public”.  Well, little did I know that my spat with my boyfriend would lead to my best orgasm ever.

So, one day my boyfriend and I were having a particularly heated argument as I was suspicious he was sexting the sexy office tease. We were in the laundry room, which had double patio doors opening out onto our lovely flower-filled back garden.

He was really pissing me off and I was telling him to be quiet as I didn’t want the neighbours to hear our sleazy conversation. “One must never wash one’s dirty linen in public”, I could hear my mother saying.

We lived next door to the vicarage – where the vicar and his family lived. You could see the beautiful 900 year old Norman church at the end of our garden. In summer, the vicar would have garden parties for local fundraisers from the Women’s’ Institute. Basically, posh older ladies with nothing better to do.

When I say parties, I am not talking about tequila shots and slip-n-slide. It was cups of tea, scones, and that most English of English nibbles, cucumber sandwiches.

The most fun you’re likely to have is seeing the vicar’s Mr. Bean-like grovelling attempt at an apology as he drops the jam and cream off his scone and onto the ample bosom of the head campanologist’s wife.

There are a lot of strange things about English village life and I will explain a little further. A campanologist is a bellringer. They practice their bell ringing during the week and then on Sundays and at weddings, the church bells ring out beautifully loud and clear. It is really rather hypnotic.

Dirty Laundry Memories Gave Me My Best Orgasm Ever

Anyway, back to my cheating arsehole of a boyfriend. He didn’t convince me as I could tell when he was lying and off he stormed. As I continued loading the washing machine I had a flashback to happier times. We had had some great sex and I couldn’t help but let my mind wander.

As I was in the laundry room I was thinking about when I was younger, watching the maid while she did the washing. The machines in England are front loaders and much smaller than the ones over here.

One day I walked in to find the housemaid sat on top of the washing machine fucking herself with one of the small rolling pins from the kitchen. That was bizarre enough, but it was the way she was screaming and shaking violently to the vibrations of the washing machine on full spin. She was clearly having an amazing time – undoubtedly her best orgasm ever. That sight never left me….

It was only then I looked out towards the garden. It is not often you see a trio of bell ringers wanking while the chairwoman of the knitting circle asks, “more tea, Vicar?” as she faints at the sight before her. My face as red as the Vicar’s strawberry tart, I slid off the washing machine and landed in a pool of pussy juice in front of half of the village.

I don’t know if it was the fact that I was being watched or the vibrations still running through my body but I felt my pussy tingling again. I got up and ran into the kitchen where I grabbed the first thing I could, a cucumber, and fucked myself hard.

The next orgasm surpassed the one I had just had. Bells were literally ringing and as the bellringers built up to a crescendo in the bell tower, so did I. I was so turned on at the thought of them seeing me I was a quivering wreck. Yet again, I experienced the best orgasm ever in my life!

As I came to my senses, I felt I needed to apologise for my shocking behaviour. I decided to put on my most demure dress. All eyes were on me as I approached the vicar. “I don’t know what happened, vicar. I felt like the devil took over my body…”.

“It’s ok, my dear”, he gushed. I knew he would be drooling – and not just from his wide-open mouth – as I gave him a sly wink.

I was now the village harlot, but what could they do? Put me in the stocks and shame me? And to be honest, experiencing the best orgasm of my life was worth the name-calling. As I left to the muttered sounds of “tart”, “whore” and “slut”. I smiled sweetly as the ladies of the Women’s Institute ate the tasty cucumber sandwiches I had brought over….

Pick up that phone and call me for more hot phone sex – you know you want to!