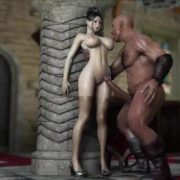 Um… Hello? Are you out there? And, reading these blogs for what they are? A cry for HELP! Then perhaps you’ve gathered that I am Beauty. Uh-huh, And I’m also Beauty’s Beast pounding pussy detainee. Yeah. I can’t just escape that one, can I? Oh, the things my Father has gotten me into! He’s a very good man, but his debts seem to always pile up and before falling completely, they always lean toward me… the fixer in his life.

My Father was a really good man, but his vices and penchant for gambling had landed him in some tough spots before, and this was no different. When given the chance to pay for his mistakes with his own freedom, he had offered the ultimate. And, that’s how I became Beauty’s Beast pounding pussy detainee. Some wondered what would happen to me. Little did anyone guess that I’d grow to love it and the Beast.

They say an eye for an eye. This time it would be a sexy, sweet-smelling pussy for his hard dick!

I came to his castle in the forest wearing my finest dress, thigh high stockings and my sexiest mule pumps. I would do anything to save my Father. I’d already lost my Mother. I want him to desire me as he has never lusted fr another. Now was my time to turn him out! If I was to gain my own freedom, I had to best the Beast.

I wondered if he could hear my heels clicking along as I strut my fine ass through his grand halls, but no one stirred. I made it through to another hall before I saw his shadow shift along the wall. My heart nearly stopped, but I pushed on. He called out for me to halt and I did.

The best way to becum Beauty’s Beast pounding pussy detainee was to gain his trust.

That would call for some sucking and fucking on my part. To be sure, once I lay eyes on him my fear levels rose. That did not deter me, however, and I closed in on him with a stern face to let him know who I was and what I meant to do to him, and he seemed intrigued. “You are the Beast, I presume”, I yelled ahead of me facing the long shadow on the stone wall.

“Aye! And who be you, lass?” came the scariest voice I’d ever heard. I fought an urge to cry, but that wouldn’t make me my Father’s daughter. Instead, I dropped the straps to my gown and let it fall to the stone floor. Let’s be real. I’m no stranger to strange sexual encounters. I heard him slurp, even though I couldn’t actually see him yet. “Why do you hide from me, Beast?” I called out in the echoed chamber.

“Come forward, whore”, he called back. And, I did as he instructed.

I stepped over the dress at my feet and heard an audible sigh and I turned toward it. There he was, finally. A huge hulking figure stood 5 feet from me, and he was naked, with the biggest dick I’d ever seen. Throbbing with veins and dripping precum as he strode forward. Once in front of me, he tossed my little ass back against the stone. Then, he set about his work licking and pulling on my hard nipples. With each suck and release, I let out small moans. I have never had my very sensitive nipples sucked so well before, and all I wanted was more. In fact, they were the main reason I started working for the phone sex kingdom!

He appeared before me and was as big a man, err Beast as I’d ever seen. And that dick? Oh, yeah. That was gonna be something to overCUM! LOL. He grabbed me and pulled me to him with the fatty in one hand and leaned me back until my head rested on a thick slab of stone. His tongue was almost as long as his dick and he worked it over my pussy like a pro. But, I knew he wasn’t. No woman was gonna fuck the Beast willingly!

Suddenly, he shoved his dick into my tight pussy! Being honest, it hurt a lot!

Watching the confusion on his beastly face only egged me on.

I lifted one stocking-covered leg and flipping myself over on him so that I was ass up now. I pushed my hands against the stone wall and shoved back as hard as I could. And this time a scream came from me. What?!? Have you ever been stabbed by a dick until it clogged your throat? Well, okay then. Don’t judge me! Haha.

Beauty’s Beast Pounding Pussy Detainee was gonna make him wonder who was the prisoner and who was the captive!

Now, I know you’re thinking you know how the Beast forced me to remain with him. Right? WRONG! That muther fucker BEGGED me to stay. And by the time he had my ass and my throat, he was MINE! There were no whips. No chains. No drugs to make me stay.  stayed because I wanted that beastly dick all over me and he gave it to me every time I looked at him twice.

Father wrote often and even came by the castle leading the charge of villagers with burning torches. However, all they saw when they arrived was my naked tits pressed against the master chamber windows as I got fucked within an inch of my life. But, the moans coming from the two of us were enough to let them know I was besting him and I wasn’t a prisoner. I watched the men’s cocks rise in their pants. GOD! They wanted IN that castle. And IN ME!

I remain with the Beast to this day as the Beauty’s Beast pounding pussy detainee.