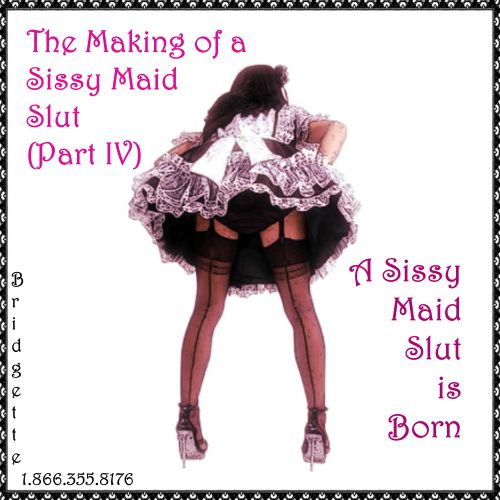 I had everything set for the next time we got together. My little sissy maid slut will be born by the night’s end.

When he showed up at my door, I give him a warm welcome and handed him a drink.  Whispering in his ear, I told him that I had a special evening planned for us. With that, his eyes lit up with instant lust, his approval abundantly clear.

I lead him to my bedroom, telling him that he has a few chores he must attend to first. His eyebrows arch up in question, and I just giggle in return. As we enter my bedroom, the outfit I have for him is laid out neatly… and it’s quite extensive. First to catch his eye is the maid’s uniform. A short little number, more attuned to a naughty French Maid’s ensemble. Right next to it is a full petticoat, frilly little panties, white thigh highs, and a garter. And of course, a pair of heels to round off the outfit.

“I figure if you’re going to be doing chores, you might as well dress the part,” I tell him with a wink. “Come on, you like the panties. Consider this just the rest of the outfit. And besides, seeing you buzzing about in the outfit is gonna be a real turn on for me. Then afterward, if you do a good job, you’ll get a reward.”

With the mention of a “reward” he smiled at me, and just like that, he’s Mr. Eager Beaver. As I helped him in the maid’s uniform, he noticed that the panties were… unique. You see, they were actually crotchless, and left his ass hole exposed (not to mention that his dick would also be dangling). But that’s not what has his attention. On the bed lays a rather impressive butt plug, along with a bottle of lube.

“Oh, didn’t I mention that? You’re going to have to do all your chores with your butt plug in place.  That way you’ll be ready for your reward when you’re done.”

The realization of what I had planned for him dawned on him like a new day, and I could see his anticipation already growing under his skirt.

As he went about his chores, I know that the fullness he’s feeling was exquisite torture. I know that when I decided to remove it and fuck his little sissy maid slut ass, he will do anything I say. And he didn’t disappoint.

When I finally had him bent over with his hands on his knees, I could see his dripping pre-cum. That’s when I made him beg for it, making him tell me he’s my little sissy maid slut. That he needed me to fuck his ass hard and fast. I made him kneel in front of me, tell me how much he needed it, and to suck on my strap-on. And with that, it was like a switch was turned on inside him, and all his lusts came boiling out, and he started sucking on my rubber cock hard and fast.

He went into the bathroom to clean up, lost in his post-coitus bliss, and when he came back out, I was seated in front of my laptop. The sounds that were coming from it made his face go pale. As he rounded to view what I was watching, I think I actually could hear his heart drop.

What was playing on the screen was him… and me, and everything that just transpired between. Every single thing I did to him; every single thing he begged me to do to him. It documented with great detail the depth of his depravities. It made for a delicious alt sex story.

And that’s when I told him about his new role as my Sissy Maid slut… and that once I had him trained up properly, I would be showing him off to my friends at a luncheon just for that purpose alone…

My thoughts come back to the present, as I focus on the entertainment before me. My friend Trish was brutally reaming my sissy maid slut. I joined the rest of the ladies gathered around, watching and relishing the spectacle. His clitty looking like it’s ready to explode in the condom I put him in so he can drink his spunk down afterward.