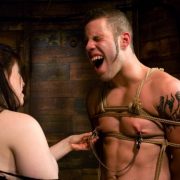 Jackson is a lawyer and is used to being in control which is why he probably likes to be a total pussy pain slut in the bedroom. I can be a bad bitch for the right man and I definitely gave him something to cry about. Jackson loves rough sex.

He loves leather and latex and pain so I thought of the perfect night for him. I put on a black latex dress and heels then put on some dark, sexy makeup.

I wanted to play with everything, he has so many toys. I wish I could afford a room like this, if I did I’d never leave my house and just have men coming over all day every day. Looking at what he had I picked up a pair of handcuffs. He stared at the floor and got naked when I told him to which was so fun, I love it when they obey.

I pulled his arms behind him, nearly folding him in half. His face was on the bench and I put his hands behind his knees.

I snapped the handcuffs on, keeping them there I then grabbed a big, thick candle. Lighting it, I knelt in front of his face, holding the candle up to him so he could feel how hot it was and watch as the wax started to melt. I held it closer and he flinched as it started to burn his cheek. “It’s going to get a lot worse,” I told him then went to his ass.

I held the candle up and tilted it so a nice fatty blob of hot wax landed on his back, just above his ass. He cried out as it landed on him and spread out. I gave his ass a couple of hard smacks then poured wax on him again, this time making it drip all over his ass cheek. He tried to jerk away but he could barely move and I poured more wax on him. Jackson cried out louder, whining and whimpering as I burned his ass. I did it a few more times then stopped while he was kneeling there shaking and crying.

His ass was a mess and blobs of drying wax were all over it. The skin around the blobs was bright red and he was panting loudly. I went to his front and held the candle up to his face. “Make a wish and maybe it’ll come true,” I told him and he blew the candle out.