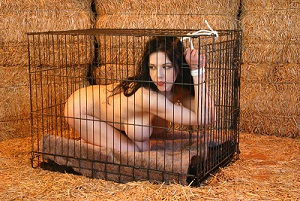 My relationship with Daddy becoming stronger we chatted about him granting me further responsibility in the attempts to satisfy his growing kinky needs. After he thought for a while he sprung it on me that he quite liked the idea of a pet. Trained, of course. A dog was his preference. He told me this because I was charged with finding and training the little bitch.

Weeks later and with the subject remaining untouched, I had found a pet online and had been meeting and training her most evenings that I wasn’t with my Master. Feeling confident that she would meet his expectations, I planned their introduction.

The night arrived and she was all set in her collar and leash. The bitch laid in her cage dozing looking stunning. She exposed her tits and smooth pussy just visible due to her lying position.

The door opened and in he came. My heart racing, I jumped up and ran to him, mumbling “I hope you like…” and pointed to the cage in the corner. The smile on his face put me at ease.

“You choose well. Daddy is pleased.” He said as he neared the cage.

Putting his hands through the bars, he felt the affectionate pet rub against him then lick his fingers. After letting her out of the cage he went off to shower and change.

After he was done he entered the living room wearing his usual black bathrobe, looking every inch the Adonis. He lazily walked to the couch and sat himself down, laying comfortably. Looking over I noticed his cock as his robe loosened, eventually exposing his whole front.

“Here, girl.” he said as he tapped the edge of the couch. Looking up, she slowly rose and crawled on all fours over to Daddy. Tapping his legs he looked at the pet saying” Up, good doggy.”

She climbed on the couch and laid in the fetal position, her head resting on his thigh, about an inch from his manhood.

“I think she may need the toilet.” Calling her over I headed to the bathroom followed by our good girl and Daddy. Pointing to the bath she jumped in. Raising her leg, she began to piss. Daddy grabbed my hair. Pulling down, he thrust his cock in my mouth.

After she finished he let go of my hair and smiled. He stood me up and told me to get in the bath and stand over the bitch. “She just pissed in the bath. Teach her a lesson.” He ordered.

A few minutes of pushing, listening to the puppy bitch whine, a gush of piss hit her square in her open mouth. Holding her head now Daddy proceeded to rub her nose against my pussy, splashing piss everywhere. “You need to learn.” He said as he let go of her head and stood up. Taking his now flaccid cock he pointed it at the pet and with a sigh he began to piss over her, stopping only to splash my thighs with the warm fluid.

Since that evening the pet girl I trained spends the majority of nights around us. She’s getting better for Daddy but the punishments do occur regularly.