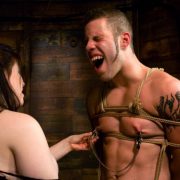 He liked to humiliate me calling me names and dressing me up like a whore. I’m not usually keen on this much but it oddly became arousing after awhile. I had to obey the rules that he set and one of his rules was that I was not allowed to cum. Not unless he gave me permission. He had put me through many different scenarios. The one that stands out the most for me is when he brought me into the basement of an abandoned building. When he walked me in I noticed a chair in the middle of the room. Well, it looked like a chair at first but when I got closer. I saw that there was a giant hole where the seat should be.

The “chair” looked more like pvc piping rigged together for a seat.

But when he flicked a switch on the box there was a strange vacuum sound. He took the penis pump looking part and attached each one to a tit.