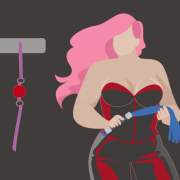 Most beginners start with bondage.

This is the easiest and can be the least painful but can also be as extree=me as cutting off someone’s circulation. Tying up or restraining your willing partner. The restraining is done by the dominant and the submissive is the one restrained. Now is the time to determine who is the Dom and who is the Sub. The person who dominates or controls the submissive, the person doing the tying up or whipping,

Now that you have determined all this its time to have some naughty fun.

Ok, are you ready to get kinky now?

I have even been known to leave bruises on him.

His begging and crying turned me on.