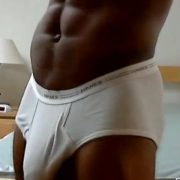 Suddenly, she felt Marcus pulling out of her too. She turned to face him, but he had already picked her up to lay her on her back along the locker room bench. He scooted her naked body up to the edge so that her head was hanging off the end of the bench. While Kevin stood to the side, rubbing his still hard cock, Marcus lowered his throbbing dick into Hannah’s mouth, sliding straight down her throat.

Kevin started squeezing Hannah’s large tits as they bounced up and down from getting face-fucked. Her curvy body was squirming on the thin bench. Kevin positioned himself in front of her, grabbed her legs and tossed them over his shoulders. He took his big, black cock and started rubbing his head against her slick, wet pussy. He slid inside of her tight cunt, filling her up.

Hannah tried to moan out, but her screams were muffled by the huge cock down her throat. When she started choking on Marcus’ dick, he pulled it out of her throat. He held it right over his face and started jacking himself off.

With that, Kevin picked her up and sat her down on his cock as he sat on the bench. He thrust into her a few times before lifting her up, spreading her ass cheeks, and lowering her tight little butthole back down on his wet dick. He pulled her hair while easing himself inside her ass. Marcus lowered himself between Hannah’s legs and began pounding her pussy while her ass rode Kevin’s BBC.

“Look at what a mess I am,” she laughed, “guess I better get cleaned up.” She looked over to the abandoned showers. “Who wants to join me?” She flashed a devilish smile and led the two into the showers with her to get… uh… clean. 😉

Don’t forget to catch up on Part One about this BBC slut! Want some more?