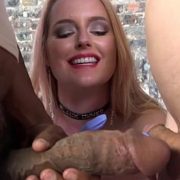 BBC Cuckold Husband: I bet you wish you had a wife like Megan. I know David and Mark are grateful for her devious desires. A first time BBC experience turned Megan into a wanton black cock lover. It was shortly after the first time that the husbands switched.
David had wanted Megan to try Big Black Cock, he knew his tiny 3-inch cock was not satisfying her. Soon after the first time, David joined the family. Big, black, and well hung, he’s the perfect man for a cuckolding wife.  So that first night together was the one that changes all three of their lives forever. The husband and the lover changed places, and Mark grew to love every moment of it. She never doubted he would. Some men are born to suck cock, and some to have their cock sucked.

Stretched wide with a massive cock, Megan loves both her Big Black Cock. His cock is larger than most black men, he addicted her within seconds. He is her drug, and he deals with her everything she will ever need. Even a child. When the family finds out that the baby she has in her stomach is black, the secret is out. David is the Father and Mark will be responsible for the financial responsibilities. Sounds like the perfect family.
The first night it happened was shocking, exciting, and explosive. She secretly always wanted to try a black man, Mark wanted his wife to be happy. Small Penis Humiliation was going to be a daily reminder for this loser Cuckold.
Her first time experience with a black man broke her pussy for any white dicks after that. Mark had a tiny cock, and he will never be David. Side by side, one was bigger, thicker, and had especially longer endurance. Mark would have to sit in the sidelines and watch that chocolate cock destroy his wife. Her pussy is a gaping tunnel that pours out dark chocolate cream.

Megan was soon addicted to BBC

If you were Mark, what would you do? Would you divorce your wife the moment she screamed? Or would you make sure all her dreams come true? A real husband would do the latter. You marry for better or worse, and this is definitely better for Megan. She will never be the same after having a big black dick inside of her.
David took her doggy style, making sure Mark watched every inch of his dick pushing into his wife. The more he gasped, the deeper David went. Why not, her pussy is a never-ending tunnel of ivory walls. David’s goal was to paint that bitch black from the inside out. Turning white married women into BBC whores had always been a game for him. Now, this whore was going to be his personal property. You’ve heard of a business with a black-owned sign? Megan will have that branded on her pussy. She has never used like this before. No cuckold can compare to her new man.