Bad Santa: All I Want for Christmas is to get Banged by Santa 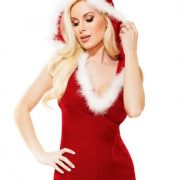 How Naughty is this Bad Santa?

When my kids were small, we always would go to a Christmas party hosted by one of my friends. One of the dads would always dress up as Santa and surprise the kids, give out presents, and they would all take pictures on Santa’s lap. It was usually tame family fun until the one year I encountered a very bad Santa, and I’ve never thought of Christmas the same way again.

That year, my friend and her new husband, Sam, were hosting the party. Sam dressed as Santa but he wasn’t the old, jolly kind of Santa. Sam had an incredibly fit and chiseled body. I’d never seen someone look hot in a Santa suit and beard but he worked it. I was so glad I wore my skin tight red dress that night. When I caught Santa’s eyes roaming my tight little bod, I knew he was a Bad Santa. But I wanted to know just how naughty he could get. Of course, I tested this as I do best, with shameless flirting.

When it was my kid’s turn to sit on Santa’s lap I said I wanted to be in the picture too. My kids stood at his sides while I sat right on his lap. I pretended to adjust my short skirt while I pressed against his crotch. His dick stiffened right away, just what I thought, this Bad Santa was very naughty. I put my arm around him and he placed his hand on my ass, out of view of the camera. I really wanted to get him alone now that I knew how bad he really was.

The festivities continued and my friend gathered the kids in the den where there was more room to play. The adults gathered to drink in the kitchen. Sam announced that he was going to change out of his suit and left the kitchen. I waited a moment then slipped out without anyone realizing it, following Sam.

“Hey, don’t change too soon,” I called after him, “ I prefer you as Bad Santa.” He turned and grinned at me. I think he was hoping I’d follow him. I approached him, wrapped my arms around his neck, and kissed him. He pressed my body hard against his and I felt his rock hard cock beneath the red suit. “I want you to fuck me, Santa,” I whispered in his ear and leaned against the fireplace decorated with stockings and twinkling lights. I raised my tight dress to my waist and revealed my bare pussy. He pulled down his plush red pants and released his massive dick. Santa came straight for me, raised one of my legs, and shoved his cock deep inside me. He grabbed my bare ass as he pounded into me right next to his family’s Christmas tree with tons of presents underneath.

We could have been caught, anyone could have walked in at any moment but that was the thrill of it. I love having a dirty little secret! Whenever I put up my tree I think about that time I got banged by Santa.

Do you want to be my Bad Santa? Call me now for amazing phone sex!