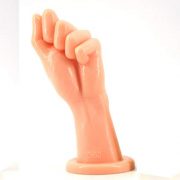 I texted Dan and told him that he wasn’t allowed to make any plans after work because I was going to play with him. It’s usually ass play with us so he had a good idea of what to expect when I showed up. We went to the bedroom and I took off my jacket while he got totally naked and said how much he’d been thinking about this at work today. Apparently, he got no work done.

I got behind him and he parted his cheeks for me so I could cover his hole with lube. His hole was already puckered and loose and I knew he’d been playing with it before I got there. The slut just couldn’t wait to get pounded. I slicked some lube on him then covered my hand in it. I fingered his hole a few times, teasing him until he was practically begging for something bigger then scrunched my hand up and began pushing my fingers into his ass.

He tightened around me for only a second before relaxing and I easily slipped the rest of the way in.

His hole was tight around my hand and I went in deeper. His back got all tight and he took a deep breath then groaned as I rammed the rest of my fist into him.  I gave him a few seconds then began pumping my fist back and forth, giving him punches that made him breathe faster. “You like that?” I asked as I fisted him, going at him good. He didn’t answer and just knelt there taking it. I kept going, giving him short hard jabs and he pushed his ass back.

Panting and moving like he needed to have his ass full of me.