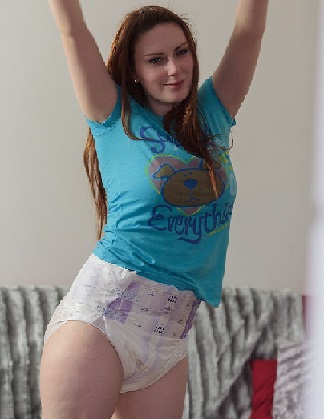 Until a recent overnight stay in a small roadside motel run by a middle-aged couple, probably both mid-fifties, I had never encountered age play. An attempt to drive cross-country to visit Kylie ended after my usually trusted Harley stuttered to a halt, billowing smoke from under the hood. With miles of open road in either direction keeping me from the nearest town, my saving grace, I saw a small motel set back from the road and barely visible.

Once I had become acquainted and shown to my room, I had freshened up and was now sitting with Caleb and his wife Britney. The owners of the motel had invited me to join them for dinner and a midnight drink as I was the only customer for the evening.

Six large Bourbons later, and feeling more drunk than I had in a long time I mentioned that I must go to bed as I was feeling tired and under the influence, Caleb looked at his wife and they both smiled turning to me and saying “don’t worry princess Mommy and Daddy will take care of you.”

Brittney stood up first and drained her drink, soon followed by Caleb who held his hand out and whispered: “ come on Mommy and Daddy will take you up to bed.” Unsure why, I followed the pair to a large room where I found a single child’s bed situated at the bottom of a double bed, used by my hosts.

As Caleb walked into the adjoining wardrobe Brittney patted the bed beside where she was now perched.

The understanding I went and sat on the edge of the bed, feeling Britney gently guide me so I was now lying across the width of the bed. Caleb emerged from the cupboard now shirtless and despite his age, he was in decent shape. He was holding an over-sized diaper and he sat the other side of me on the bed.

Laying back looking at the ceiling spin, I closed my eyes and felt someone’s hand undoing the button on my jeans and sliding down my zipper. A second later I heard a “susssshh just lay back while Mommy gets you ready for bed,” then my pants were being pulled down to my ankles. As they came down so did my panties exposing me completely to the kinky couple.

Brittney took a tub of cream and started to rub the cream on my inner thighs, slowly moving her hand closer and closer to my now swollen and moist pussy. I let out a quiet groan of pleasure picked up by Caleb who moved up kneeling by my head. “Sssshhh” he said as I turned my head to face him noticing he was now totally naked “here, use your pacifier” as he said this he moved his thick, erect cock to my lips and pressed against them until they opened.

Within minutes Caleb was thrusting rapidly in and out of my mouth groaning and whispering “suck it baby girl.” I couldn’t speak. I was on the verge of an intense orgasm. Brittney now knelt on the floor, her head buried in my thighs and her tongue teasing my clit. My orgasm was full and my juices flowed with such force they splashed the back of Britney’s now soaking face and dripped down my inner thighs.

Caleb stopped thrusting and said, “bedtime baby, let’s get this nappy on.”