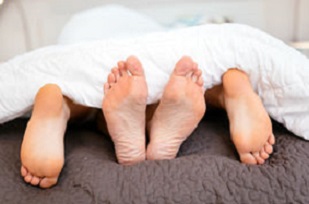 Adult sex stories here at the Kinky Kingdom are brought to you by Phone Sex Kingdom. This kinky tale is a true sex story.

One day I was hanging out at my boyfriend’s place with a friend of his. Things were pretty mellow because we had company over. However, it had been a little while since I’ve had phone sex since my computer was broken and we hadn’t had much time together.

After a while, I just didn’t have it in me to take it anymore. So, when his friend went to the bathroom, I slid under the blanket with my boyfriend. Despite the fact that Jordan protested, my hand was inside his pants and I was stroking his cock.

He just couldn’t help how hard he was getting under my soft touch.

Before we knew it, his friend came waltzing out of the bathroom, however, I didn’t take my hand off Jordan’s cock. He squirmed under my fingers, but he didn’t want to draw attention to himself. So, he kept as still as he could because he wanted to remain inconspicuous.

I could tell he was getting so close to exploding inside his own pants so I backed off. My pussy was craving his rock hard cock deep inside me.

A few hours later when it was time to crash and the alcohol had worn off, his friend passed out on the couch. We were still watching Z Nation on Netflix, but sex wouldn’t be too distracting.

I crawled on top of him and threw the blanket over us. I bit my lip as I rode him, feeling his cock throbbing inside of me. He pulled me as close as he could so the couch wouldn’t move or creak and we both came with my head buried in his neck and his in mine.

We both got what we wanted and neither of us woke up his friend.