Have you ever wondered how people wind up in an accidental glory hole situation? Surely to some, it may seem like a very easy scenario to avoid. However, there are many times when silly men and women alike find themselves stuck in this type of instance. After all, I myself have wound up in my own accidental glory hole position a time or two. Although today’s story is not about myself and the misadventures of my own hornyness. But, a friend of mine who I placed in a rather sticky situation. Pun intended.

Sex, Drugs And Rock And Hole

As a lover of all things fun, there is very little that I shy away from when it comes to having a good time. Anytime there is an opportunity for a party, I am always down. Sometimes I tend to drag people I know into these situations as well. Something that you would have experiences with me during a wild taboo phone sex call. After a night out, I woke up to a fella sleeping next to me in bed. Though, that is truly no surprise when it comes to me. 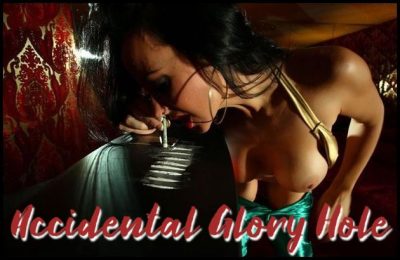 However, upon waking he was not ready to end the weekend’s party with a simple kiss, a quick goodbye, and promise of another nights text or call. However, he wanted to continue to fuck and have fun. In fact, he pulled out a plastic baggie full of the prior night’s treats for us to continue snacking on. Coke was of course on the list. After snorting some lines he got down between my perfect legs and began eating my moist pussy, groaning as he stroked his cock and ate last nights cream pie. His female oral sex skills were amazing!

Then, snorting some more coke we moved to the shower where I sucked up and down the full length of his throbbing boner. He was rock hard and there was no ending in sight to our day. Especially as we started day drinking and he pulled out the MDMA. We each popped a couple of caps and called an uber to take us to the adult toy shop. We wanted to find something fun to play with. Although, at this point, we did not realize just the fun we were going to be getting ourselves into. By the time we got to the store, the two of us were rolling hard. We could not keep our hands off of each other and the store clerk noticed.

Therefore, the two of us took off in another Uber followed by a very long, drug-induced walk down the random alleyways that the man told us about. Finally, we reached the door that would lead to the secret basements glory hole. Although admittedly going to the creepy heavy metal door and walking into the dimly lit basement was probably not a great idea. Once downstairs and seeing the wall and hearing the moans of pleasure coming echoing in the dark. We knew we were in the right place. After all, pleasure is exactly what we had come for.

It’s As Simple As An Accidental Glory Hole Dick Slip

Suddenly his groans became more intense and he began to bend over slightly. Unaware of our positioning we did not realize the accidental glory hole position we were in. A cock had slipped through the hole into his tight ass hole as I sucked his cock. His dick throbbed hard between my lips. It made me so wet listening to him groan out.

I pulled the table over for me to lay across in front of his face. He ate my delicious pussy his ass is being pounded through that hole. We both came over and over again taking turns being filled with the mystery sausage on the other side of the wall. An accidental glory hole pleasuring that leads to an entire day of exploring new sexual satisfaction for that man.