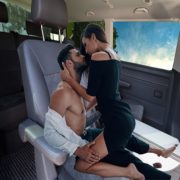 Two hours ago, I was anticipating this moment; an hour drive with no traffic.  I parked around the corner from the arranged destination. He called to tell me he was close, so I kept the car running with the heat on.  Then I saw his truck slowly driving up the street. All I could think about was his long, thick dick.  I pushed the button on my key fob to open the sliding door. He stepped in, looking sexy as hell. What we had going on was forbidden. I wanted more than a secret rendezvous for long, thick dick, but he cannot give that to me.

He was like crack, and I was totally addicted to him. I needed to cut him off and go cold-turkey. But every time I tried to get away, our magnetism kept pulling me back to him—kept pulling us back towards each other.

He sat down next to me, dressed in jeans and a thick, zipped-up hoodie. Our bodies crashed into each other as our lips met in a feverish kiss. I never want to stop kissing him, but I always wanted to put my lips somewhere else.  Would he mind if I swallowed his dick now?

As if he read my mind, he unzipped his jeans and grabbed his thick cock. My eyes widened as my mouth watered, anticipating his sweet taste.  I devoured him in one gulp, not caring about the cars that were passing us by on the street. He threw his head back and moaned my name.  This is how a secret Rendezvous for a long, thick dick turns into love.

I worked my mouth up and down his shaft while looking up at him out of the corner of my eye. He slid his thick fingers out of my wet hole and looked deep into my eyes.   Those two soaked fingers almost instantly were attracted to his long, waiting tongue ass he sucked them from top to bottom.  The taste of my cum turned him on and turned him into someone else.  He pushed my head all the way down as I choked and gagged on his spit-soaked rod. Tears formed in my eyes as I tried to catch my breath.

I wanted to feel him deep inside my pussy.  Our time together was coming to an end.  I sat up, slipped off my socks, and took off my leggings. I didn’t even bother taking off my bra or my shirt, and I  wasn’t wearing any panties. Only his dick was exposed. I turned to face him and stretched one leg across his body, and straddled him. A big smile spread across his face as we were body to body, face to face, dick to pussy. I leaned in to kiss his lips while I reached down to grab his pulsating ram-rod. When the head of his shaft was at the entrance of my love hole, I slid down, ever so slowly, to feel it inch by inch as he entered me.  This is how a rendezvous for a long, thick dick turns into love.

Hearing those words made me want to move faster and faster to make him feel all of my pussy.  At the same time, I wanted to make this rendezvous last as long as possible. He tried not to lose control without changing the focus from what was right in front of him. Then he came, hard.

I got off my joy ride and sat down next to him, leaning my head on his shoulder, missing him already.  Without him inside of me, I felt so empty. I already wanted more of him—his kisses, touch, sucks, licks, nibbles, and bites. But he had to go.  I was on borrowed time, and that time was up. It was him and me but no we!  I offered him a meaningful girlfriend experience over and over, but he could not give me more than this secret rendezvous for long, thick dick; why did I fall in love?

One hour later, I was back in my house… in my bed, holding my toy against my clit and screaming his name as I came over and over again, trying not to squirt since I just washed my linens after my solo escapades the day before.