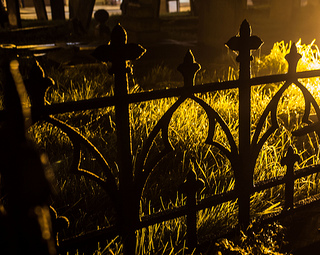 I was waiting in front of the cemetery’s entrance, an ancient wrought-iron gate we were going to have to climb over. My friends had already gone inside and to prepare for the evening’s performance. The night’s utter darkness was illuminated by only the full moon hanging overhead. Eventually, though, I saw headlights approaching from the distance. I knew it was him. I knew he would come . . .

He shut the car door and climbed out. We looked at each other until the headlights turned off, taking each other in for almost a full minute. Once it was completely dark again, he said:

“I can’t believe you really came.”

“I said I would, didn’t I?” Maybe he saw my wicked grin. Maybe he didn’t. I sauntered towards him, wrapping my arms around him. My lips grazed across his ear, probably bright red from excitement, before I slid them down onto his neck.

“Oh, you’re a vampire now?” he giggled nervously as I pretended to bite his freshly shaved skin.

“Maybe I am. You know you shouldn’t meet strangers from the internet . . . especially not in creepy cemeteries in the middle of the night, right?” I looked up at him, batting my eyes coquettishly before pulling away and hopping onto the ledge on the side of the gate.

I had already hoisted myself over the top of the rails and shimmied down inside the graveyard before his feet made it onto the ledge. Then I watched him climb up clumsily, clearly on edge. Panicked, maybe even. It was too dark to see his face.

“Don’t worry, I’ll catch you. You can do it, it’s not that far of a jump!” I held out my arms dramatically, as warmly and innocently as I could muster.

He let out a quiet, horrified moan as his fingers landed directly in the middle of a thick cobweb between the rails. I watched as he winced, his jitters (really stage fright, of course) got worse, more frantic.

“What do you have to be scared of?” Again, I waved my arms and reached them out beneath his dangling boots.

And then he jumped.