25 Days Of Sexmas: Hot Sex With Your Big Candy Cane!* 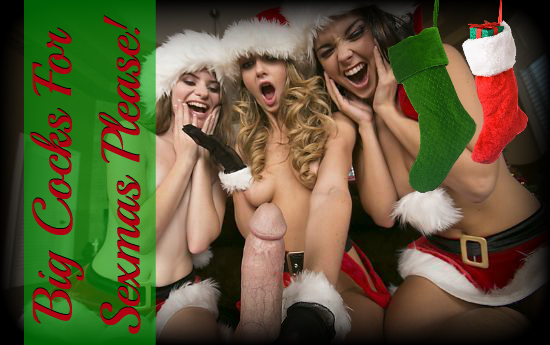 Hot sex is all any girl my age is really looking for. At the age of 19, there is no way I would ever think about settling down. In fact, I love fucking so much sometimes I even do it just for fun, or even for charity. After all, that is what my Sister’s and I used to do to raise money for charity. Every year we would host various holiday events where sex would be exchanged for generous charitable donations. One such benefactor chose to take on not just one of us, but three at one time. Surely, he had no idea what he was in for ordering up such fine pussy in a large amount. However, we were down for anything.

25 Days Of Sexmas: Hot Sex With Your Big Candy Cane!

No hesitation in a good 3-way holiday dick suck!

So, without even pausing I began to suck onto the big head of yours. Alongside me, my friend each took a ball in each mouth. Three hot babes sucking up your meat and two vegs were making your toes curl. However, you can’t just stop there though. My pretty cunt onto your face. The three of us took turns riding your perfect cunt eating mouth. Then, when we were done you lined the three of us up and took turns fucking each of us nice and hard! We love being your dirty little sluts!