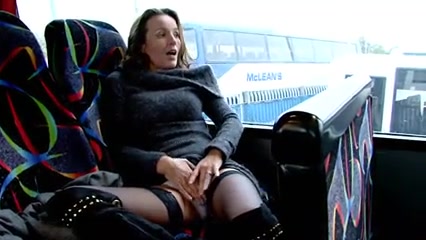 One Friday evening I went to meet friends at the skate park, which doubled as the local hang out. Deciding it was time to call it a night, dressed in a short frilly white summer skirt and t-shirt, the cold had become too much. So, after saying my goodbyes I made my way to the bus stop, which took me almost to my door.

Arriving with 5 minutes to spare, a guy walked onto the platform and stood reading the timetables, and every so often looked at his watch. Realizing I was staring, I averted my gaze and looked at the posters on the wall. After the second time reading them I could feel this guy’s gaze and look up. I caught his stare. He snapped out of his trance, looked up into my eyes, and smiled.

Cute I thought just as the bus rolled up, putting an end to that thought.

I walked up the stairs and grabbed the seat at the front, which faced out into the rest of the bus meaning I could see everything that was occurring. The guy sat on the left-hand side seats about three in front of me. Apart from this guy and myself, there was another middle-aged guy on the right-hand side seats directly opposite the bus stop.

After a few minutes, I was aware of the feeling I had on the platform that I was being stared at. I looked up and they both sat eyes fixed on me. Why? I thought. Then it clicked. They weren’t looking at my face but towards my waist and legs. I let out a gasp under my breath as I noticed that my skirt had ridden slightly, revealing my pink lace panties and my outer thigh. Oh, no what am I going to do? I thought. Looking up again I saw the two men hadn’t moved their gaze. I sat frozen for a minute unsure of how to adjust myself without creating a fuss.

What I did next shocked even me.

Looking directly forward and passed the guys I slowly started to open my legs. I could feel the smiles as I widened them, exposing the netting on the lace panties. The netting was treating them to a peak of the landing strip hair I waxed yesterday. I felt a feeling of power.

I lowered my hand and began to stroke the inside of my thigh, still not giving eye contact. Moving my hand up to the panties, I moved the edge into my grasp and pulled the side of the panties up flashing the slightest bit of ass. Out of the corner of my eye, I noticed a movement by the guy from the window seat. Then heard what sounded like a zipper unfastening. I couldn’t resist. I look at the guy on my left. He had moved to the edge of the seat his legs hanging over into the aisle, and he had a massive manhood in his hand stroking his tool till it was standing tall.

Seeing this the other guy shuffled into a similar position, unzipped his fly, and took hold of his growing member. Rising slightly, my panties slid over my ass. I slid them off before returning to my seat.

I put the panties in my bag and returned my hand between my legs.

After a few moments, I opened my eyes, hearing the groans increase in volume and regularity looking at the guy on the right, the noisiest of the two. I saw his face tense, looking at his cock he stopped stroking and held the base slightly pulling the foreskin back until he erupted with a loud moan, the spunk dripped from his cock. Looking at the other guy, he looked at me and as if on cue, he shuddered and came. His load traveled, landing a few feet in front of me.