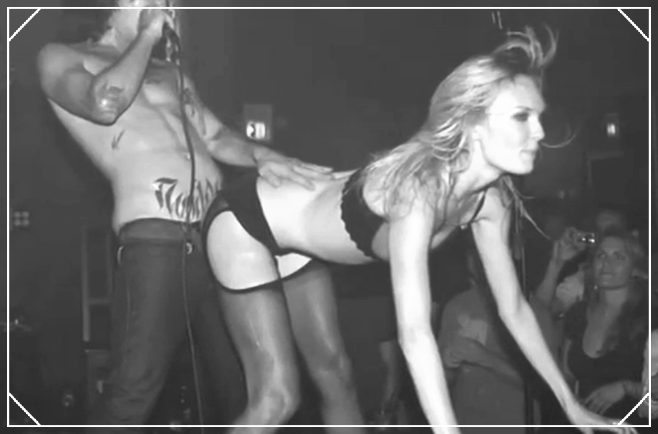 I’m turning 26 years old on Sunday, and each new birthday, really makes me reflect on all of my past experiences and how it has brought me to where I am today. I was going through an old journal of mine from when I was fifteen years old. I was dating a senior in high school during the time, and boy did I find some JUICY stories!! One that I think you will find very thrilling is the time Ken (who was a guitar player in a band) took me four hours away from my sad and boring town. The band rented a van from one of the local rental businesses; it could fit about twenty people inside. I was excited because I wouldn’t have to share a row alone; I laid down on Ken’s lap in the back seat of the van and fell asleep.

Before I knew it all of Ken’s band mates were all looking and watching me as I straddled up on Ken’s lap and began to dry hump him.

I arched my back and ground until I could feel the final sensation that made me scream. I looked around me and winked at everyone before I laid back down on Ken’s lap and fell back to sleep.

Being a girlfriend of a popular band meant there were a lot of people who wanted to do things for you. So, when we arrived to our hotel room it was no surprise that the room was full of alcohol and marijuana. Instead of waiting around, we all began drinking and smoking. I loved having the chance to be as wild as I wanted to be without my parents around.

I danced to the radio, grinding my hips on Ken while smoking a bowl with a bottle of whiskey in the other hand. Ken pulled me in to kiss him, and as I was taking in his wet tongue. The manager of the band walked into the hotel room and told everyone it was time for the show.

I stood with the manager Mike while the band played their set, I watched as other girls hummed along and swooned over Ken’s body. I loved watching other girls long after my boyfriend, I was confident because I was the one he wanted. Mike bought me countless amounts of alcoholic drinks during the concert…

I was so trashed by the end of it that I didn’t realize who was who.

The next part was a little fuzzy, but from what I was told. I was brought back to the hotel room by Mike the manager. I remember taking another bowl and smoking while I listened to the music that was playing in the hotel room. So I wanted to be wild, and I wanted to experiment sexually. So I sat on Mike’s lap as he was playing a drinking game with all of the other guys. I took his face in my hands and swayed my hips as I bit his lips. He smiled at me and picked me up and laid me on the pool table.

My long legs wrapped around the then thirty-five-year-old man, all the guys watched as he began to penetrate me over and over again. I loved that everyone was watching me during this time. And when Mike was done pounding my brains out, I looked over to Ken and smiled. He knew what was next, and made his way toward me. I wrapped my long legs around his scrawny teen body and pulled him deep inside of me.