Sneezing Fetish Confession: I used an entire box of Kleenex this weekend ♕ 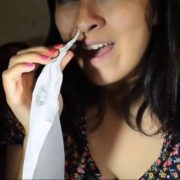 My new client called with a sneezing fetish confession.

I was really excited to hear his sneezing fetish confession because I’d woken up Friday morning with the beginnings of a cold. A pile of tissues had already begun to amass on my desk. This was going to be fun.

I was sure I’d be able to make myself sneeze on command. However, when my new client called back I couldn’t quite “get it up” as far as giving him a real, genuine, uncontrollable sneeze. I breathed in pepper so hard I was basically huffing. I tickled all inside my nose with twisted up Kleenexes. But alas, only little sneezes came out. Funny how I usually try to hide my sneezes on the phone or in public but now at the moment where sneezing was the MOST appropriate behavior, my nostrils were foreign-substance free!

It wasn’t that sniffing the pepper didn’t work. I could feel it working even as I took those giant whiffs. It was just that it didn’t necessarily work instantaneously. Sniffing the pepper made my nose tingle and feel very strange. Maybe I should have used cayenne?

Anyway, the buildup definitely started as I chatted with my new caller, mostly about my allergies and how my real sneezes sound. But sadly, my new sneeze fetishist friend did not get to hear one of my “real” sneezes. Guess what happened as soon as I hung up the phone?

Sniffing so much pepper had finally caused the reaction I’d been trying to create.

I guess you could say I had “edged” my cilia to the point of “orgasm.”

By yesterday my runny nose was so bad it felt like a hot river of booger lava. Some friends came over to bring me tea and lemons. I told one of them about my sneezing fetish anti-climax Friday afternoon. Right away, he took one of the lemons and cut off a piece, squeezing the juice into a cup in front of him. And then he snorted the lemon juice. Just like with the pepper, it took a few minutes. But eventually, he was sneezing his brains out, and in between fits on the brink of another.