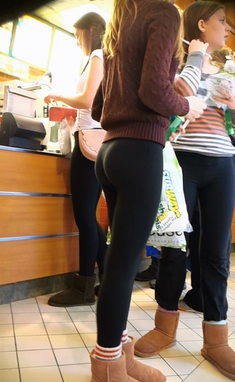 It felt a little weird at first when my boyfriend said that we should take pics of girls asses and rate them. We didn’t have anything else to do for the rest of the day after we finished our lunch. So instead of going home he thought of this “experiment”. With every cute girl that came in, either me or him would secretly take phone pics of her ass from underneath the table. We tried to keep from giggling out loud but, the rush of knowing that we were actively watching these girls and they had no fucking idea was hilarious to us!

One girl came in with leggins and cute little ugg boots on. She looked pretty young. At first she was standing with what looked like her friend but then the friend left and the pretty girl was all alone. Her ass was nice and plump in those black leggins. She was so unsuspecting and innocent. When she started walking over towards us, my boyfriend threw the phone to the side. She greeted us with a smile and said that she was lost. “I’m not from here and I’m visiting my aunt. She told me I could explore the city while she’s at work but now my phone is dead and all I have is her address. I have no idea how to get back to her house.”

I didn’t hesitate, “Oh no problem. We can take you to your aunts house!” When we entered our neighborhood the girl said that nothing looked familiar to her. I turned to her smiling and said, “Oh don’t worry we just have to stop by our place for a few minutes.” She smiled and seemed to calm down. We all laughed and talked about our favorite music, she said she liked my lip stick. When we pulled up to our place we invited her in from the hot car. She asked if we had anything to drink. The only thing we had that was cold were a few beers in the fridge. So we all popped open a few and continued to laugh and get to know the pretty girl with the big brown eyes and the tight ass.

After a couple of hours of having fun. She said that she needed to get going. Me and my boyfriend didn’t want her to leave. At least not until we saw what was under those black leggins. I told her that she couldn’t leave yet because I wanted to know how her pussy smelled. My boyfriend started smiling as he pulled out the camera phone. Our little visitor tried to resist my advances and ran to the door, trying to get away. My boyfriend was faster than her. He threw her on the floor and started recording. She was crying and scared, which made my pussy wet and my boyfriend’s cock hard.

I grabbed some rope from underneath the couch. We tied her hands behind her back and told her that we just wanted to have a little fun. I licked her tears away. My boyfriend ripped her shirt and pants off. I drug her by her hair down the hall and into our bedroom. We were all shaking. She was shaking from the fear of not knowing what was coming next and we were shaking because of the fucking adrenaline rush. When I pulled her leggins down I could see that her panties were soaking wet. I tore the panties off and smelled the crotch. Her pussy smelled SO GOOD. I licked her clit and used my tongue to fuck and lick her cunt hole. She was soft and tender. Ripe like a peach. As I ate her pussy my boyfriend got undressed. The more her she screamed the more I licked her young clit.

Jamming my fingers into her pussy while I ate her out, I could feel her warm juices flow over my fingers. My boyfriend’s cock was dripping pre-cum. He couldn’t wait to get inside of her. He told me to go to the bathroom and get the Astro Glide lube. I was only gone for a few seconds but, when I came back my boyfriend was raping her. He was deep inside of her young pussy…making it cream and throb. We didn’t even the lube because my boyfriends dick was forcing her to cum and drip on our sheets. I made her eat my pussy. I held her head so she wouldn’t try to turn it. Her nipples were hard.

Her soft, wet tongue felt so good licking my wet pussy. My boyfriend was fucking her really hard while I held her legs and cheered him on. He kept saying that she was so fucking tight and that he could barely move his dick inside of her because her young pussy was holding tight to his thick cock. Every time he said that I would slap her face, causing her body to tense up even more. Her pretty little toenails were painted red, I remember because they tasted like cherries as I sucked and licked on them.

HARDER! HARDER! HARDER! I screamed for my boyfriend to fuck her until she passed out. LOL! I wanted him to pulvarize her tiny hole. I got off of her face and got behind my boyfriend’s ass. I pushed him from behind making him go deeper and deeper inside of her. Her tears made me horny. Finally, I pressed and held my boyfriend’s body deep inside of her. I could barely even see his balls anymore. He had completely penetrated her pussy. I held him inside of her until he bust his nut and it oozed out of her nice and slow. He had fucked her so hard that she really did pass out. As she lay there with her legs open, beautiful and innocent, I licked our little cream filled slut cake. I licked her until she was clean.

We made her into our sex slave, love goddess. We’ll probably keep her with us until she’s old enough and ready to go out on her own. We love her so much. And I think she’s even grown to love us too.

I want to share our love with you too! Ask me anything you want about our little slut. I also like to take special requests or suggestions on what to try with her too. So pick up the phone and let the fun begin!