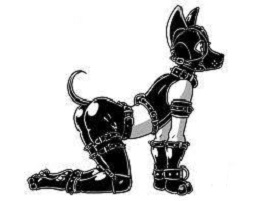 Short Sex Stories and How I Fucked My Former Pet

One day, I decided to go to the local adult store because I needed to pick up some more toys. Things get old, things fall apart, so I needed some replacements.

The girl behind the counter greeted me by name because I’ve been there every week for over a year. Not always to buy something -insert wicked grin here-.

I greeted her back and turned left toward the fetish section. That’s when my jaw hit the floor because I saw someone I hadn’t seen in like forever. He wore his usual ripped jeans and a black leather collar around his neck.

I frowned because it wasn’t my collar he was wearing.

He’d moved away a few months back, but it looked like he was back in town now. If he thought for a minute he’d have some other bitch’s collar around his neck he had another thing coming. Yes, I’m territorial.

So, I walked over to him and punched him in the shoulder in lew of saying hello. He turned sharply and scowled at me, however, he realized who I was and his look changed real quick. He smiled and bowed. I guess it was still instinctual for him to do that. We were in public so it was only a slight bow as our casual protocol called for in the contract we’d had.

Then he smiled and gave me a hug. He’d realized he wasn’t mine anymore, but that was soon about to change. I asked Nancy (the girl at the register) if she had any cutters. She handed them to me and I went back to my puppy.

I put one hand around his throat and pushed on either side of his jugular. With my other hand, I cut the lock off his collar and pulled it off him. Without a word, I grabbed him and pulled him outside. He led me to his car and I pushed him into the backseat.

He was mine again because I fucking said so.