Sexy demon and the ritual of summoning: Bring on the succubus* 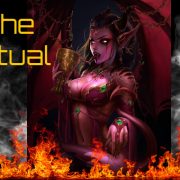 Sexy demon and the ritual of summoning: Bring on the succubus

Who’s Luci?. He thought curiously. The package was slightly heavy and had a strange wax seal on the back. He carried it into his kitchen. Grabbing a sharp knife he cut the seal and the paper fell aside.  Inside was a note, 5 black candles, a piece of thick white chalk, a small empty glass jar with weird symbols on it and a very old leather-bound book. What the fuck is this shit he thought.

Unfolding the letter the ink shimmered and said his name

Wait what?  The letter thus read…

The book was illustrated with pictures on how to set everything up. With this in mind, it was easy to follow the step. Following each direction, on the whole, a bright green fire blasted up when he spoke the last words.

Laying in the circle of flames was a beautiful woman with large black horns, wings, and a black spaded tail.  Alex couldn’t believe it worked.  He picked up the jar and in a commanding voice, he spoke. ” I know you hunger Succubi now drink the essence of life-giving”  He felt silly but nevertheless, he wanted to fuck her. She was the most beautiful creature he had seen.

The ritual had worked, Alex successfully had tamed a sexy demon. In other words, he had his own personal slut. This was particularly exciting and as she stepped out of the low green flame she spoke.  I am Miri your personal demon how may I serve you master.  She snarled.  Alex would give her a pass on this, all things considered, he did rip her out of her home.

For the time being, Alex would settle for a blow job and commanded her to do so. For this reason, Miri dropped onto her knees.  She flicked her tongue around and moved it in beat with her head.  Sucking his hard cock until it throbbed with pleasure. Her tail came up at the same time and began to stroke his full balls as she worshiped his throbbing cock. Alex tossed his head back in ecstasy as he began to pump rope after rope of cum out of his cock. The hungry Succbi drank every last drop and flicked her tongue across her teeth. Is that all you got? She taunted…

Like the sexy succubus well I would love to play out the fantasy with you! Let’s have some sexy spooky supernatural fun with some hot phone sex!