As my Daughter Sleeps, I Ride her Boyfriend’s Throbbing Hard Cock (Pt.2) 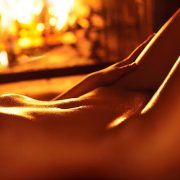 I made my daughter and her boyfriend dinner and suggested we watch a movie afterwards. They both happily agreed. Before dinner, I changed into lacy pink lingerie that was sure to create an instant throbbing hard cock from Charles. I covered myself, for now, in a matching short silky robe. As we ate dinner, I sat directly across from Charles. I flirted and laughed at all of Charles’ jokes the way my daughter does. I let my robe come apart at my breasts a few times to give him a peek. His eyes glanced down and stayed for a few seconds and I covered up again as if I didn’t mean to do it. I saw his eyes dropping again and again hoping to catch another glimpse. I could tell he wasn’t sure if I was teasing him or not.

Teasing him Underneath the Table

Then I decided to not be so subtle. I ran my bare foot up his leg and slowly made it to his thigh massaging him there seductively. I was really taking my time with it to let it sink in that I wanted his young hard body. He looked up at me with wide eyes, his body frozen, like a deer in headlights. I smiled flirtatiously. My daughter didn’t catch on to anything, poor thing. But, what she doesn’t know can’t hurt her.

Then I went for the kill, my foot continued to slide up his thigh and I caressed his now throbbing hard cock. I heard him gulp and look at my daughter to make sure she wasn’t aware of what was going on. I continued to smile at him, my caressing becoming faster and more forceful. His cock pulsating under his jeans begging to be released. I teased him just a few seconds longer, I didn’t want my daughter to figure it out and ruin my plans for tonight. I couldn’t wait to start the movie.

I purposefully chose a movie that I knew my daughter would find boring. Then I set the mood. It was a cold icy night, so I threw a few logs in the fireplace and a roaring fire quickly came to life. I turned off all the lights and we started watching the movie. Charles sat in the middle of my daughter and I on the large couch. She was comfortably cuddled up with a warm blanket. Just as I had predicted, she fell into a deep sleep in no time. She was probably exhausted from the intense fucking she took earlier. Charles, meanwhile, seemed ready to go for a second and third time. Just my kind of hot young stud.

The Fire will Warm our Naked Bodies

Charles sat there nervously, not moving or saying much but I think he had an idea of what I was planning. As soon as I was sure my daughter was in a deep sleep, I turned off the TV so we could only hear the crackling of the fire. I stood in front of Charles and dropped my robe to the floor without a word. He still sat there motionless, “Are you sure this is a good idea?”, he nervously asked. I could tell he wanted me badly he just didn’t want to make the first move, he was faithful to my daughter after all. “Yes, I’m sure”, I assured him. Then I dropped to my knees in front of him.

I slowly and quietly unbuttoned, then unzipped his jeans all the while keeping eye contact. My mouth watered and I bit my lip to keep my anticipation at bay. Finally, his huge throbbing hard cock was released. It was so much bigger than I remembered. I took it eagerly in my mouth, deep throating him immediately. Charles tried unsuccessfully to quiet his heavy and excited breathing. I continued taking him as deeply as I could over and over, fucking him with my mouth. I needed him to not have an ounce of regret after this. He needed to crave me as much as I had been craving him.

Suddenly, my daughter started to stir, I think I was being too forceful with my mouth fucking on the couch. I told him to stand and strip and he obediently did as he was told. He stood before me, lit only by the light of the fire. The shadows dancing off his young muscular body, his six-pack so defined, his throbbing hard cock at attention. I stripped off my lingerie, unable to wait any longer. We both stood there staring in awe of each other’s naked bodies, warmed only by the heat of the fire. I wanted him to make the next move to show me how much he really wants me.

Riding her Boyfriend while she Sleeps

He rushed at me, kissing me deeply, gripping my firm ass cheeks, then moving his mouth hungrily to my perky tits sucking hard at my erect nipples. Then without warning, he picked me up and immediately impaled me with his throbbing hard cock. I couldn’t help but let out a little scream but this didn’t stop him for a second. His strong muscles supported me easily and he thrusted aggressively in and out of my wet pussy. I looked over at my daughter but she was still asleep even through our moans of pleasure. “Cum inside my pussy”, I whispered to him. It didn’t take long for him to blow his load inside me. I covered his mouth with my hand to stifle his moans.

Out of breath and glistening with sweat, he let me down gently. I picked up my lingerie and my robe and walked back to my room leaving him standing there, wanting more. I knew I now had him where I wanted him and I could get a piece of that throbbing hard cock anytime I wanted.