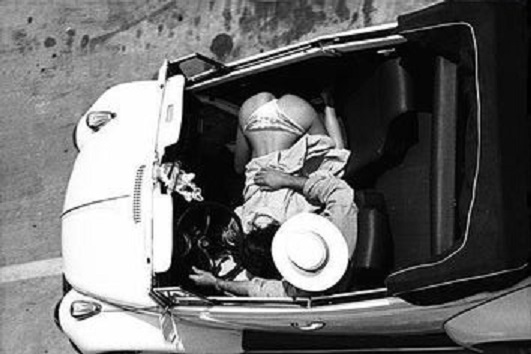 Satisfying my boyfriend’s desire for raunchy public sex! College is a great time for trying new thing and there’s something that my boyfriend has wanted to do for a while now. Tyler’s into public sex, but hasn’t got the balls to actually try it all the way. The most he’ll do is kiss me and finger me at the back of a movie theatre and one time I blew him in his car when we were out late one night. I wanted him to fuck me in broad daylight and wandered around our college campus until I decided on when and where. There’s a green field behind the school and it’s usually empty until half an hour before classes start.

If we got there an hour early we could have raunchy public sex with some privacy, but there would still be the excitement of getting caught by someone. Tyler met me in the parking lot and we walked to the field. I had a blanket with me and spread it out on the grass, my pussy already getting wet. He kept looking around and whispering that we shouldn’t do this, we might get caught. I told him to stop being a pussy, the risk of getting caught was part of the fun. I rubbed his dick through his jeans and kissed him, taking things slow and easing him into it. When he was hard I undid his zipper and freed his dick. I then laid down on the blanket and shoved my skirt up, grabbing my panties and tugging them down.

They slipped to my ankles while Tyler shoved his jeans down.

He took one last look around then got between my legs while I guided him into me. He pushed into my pussy slowly, gasping and mumbling “Fuck, you’re so tight.” I heard a car drive past and Tyler froze for a second which drove me crazy. I rocked my hips, fucking myself on him until he started moving again. That little reminder of being in public must have sent a rush through him because he went at me faster, his dick ramming into me so hard that all I could do was take it. I love it rough and the blanket bunched up under me as I hooked my leg around him.

I moved with him and my pussy got tighter as tingles started going through me. “Don’t stop,” I told him as my pussy juices leaked all over the blanket. He pounded me into the ground, as I came and he put his hand over my mouth to keep me quiet. GOD, I can’t get enough of raunchy public sex!

I couldn’t breathe and my pussy felt so good as he kept moving in me, his dick rubbing my clit.