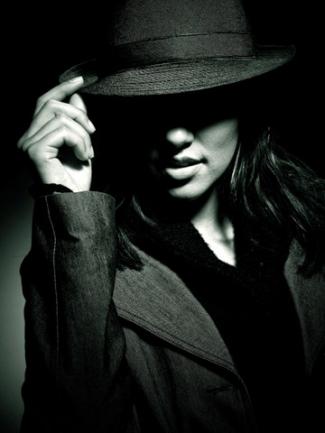 The beautiful blonde sitting across from me slid an envelope of cash across the table – confirming that she would double it, as agreed, once I caught her cheating husband in the act. I smiled and assured her that I’m an extremely dedicated Private Investigator, and I ALWAYS get my man! As she shook my hand and walked away, I looked down at the folder of information she had gathered for me and opened it up. A recent picture of her naughty cheating husband was paper-clipped to the first page. For identification purposes of course. I picked it up and studied it carefully. Nice, I decided. A trophy husband! Piercing blue eyes, well-defined chin, complete with dimple. Oh yeah. He DEFINITELY looked like trouble!

I leaf through the rest of the information in the folder.

According to his wife, he is a gambling fanatic, and spends most of his nights hanging out at a local casino – losing large amounts of her money. Perfect! I would go there tonight, stake him out, and find out what he’s up to! I look at his picture again, and my body involuntarily shivers. With his eerily perfect looks, and that twinkle in his eye, I was bound to witness something useful to report to his chilly wife!

I show up around 10:00, and all the tables at the casino are in full swing. I scout around, but don’t see my rakish, vow-breaking subject at first. Spot him at the roulette wheel, a pretty young blonde hanging on his arm, keeping him company. She looked up into his eyes adoringly, and I wondered if she knew he was a married playboy looking for a toy for the night; or, if she thought she had a chance to catch a rich attractive man and hook him for herself! She leaned in against him and his arm went lightly around her waist. I felt a momentary pang in my stomach and I thought wait a minute – why am I suddenly wishing that was ME? I’m getting paid to CATCH this cheating husband! Not trying to hook up with him myself!

The thought hit me like a ton of bricks – hook up with him yourself!

That’s the PERFECT way to catch him in the act! The Ice Queen wife did tell me to use any means necessary to catch him in the act! That’s the whole point – prove he’s being unfaithful so that she can divorce him and not have to give him a penny of her large inheritance! Just then, he excused himself to go for a round of drinks for he and his pretty blonde friend. My heart hammered in my chest as I played it cool and walked over to the bar myself.

I stood behind him a bit, and as he turned, drinks in hand, I positioned myself to be directly in his path. He startled, and spilled the glass of champagne he was carrying back to his playmate. A bit of it splashed on my designer dress, and he apologized profusely as he asked the bartender for a towel and a glass of club soda.

I assured him that it was fine, but he dipped a corner of the towel into the club soda and began to gently rub it into the stain so it wouldn’t set. It was right at my waist, and I couldn’t help but notice that he was staring down into the cleavage of my revealing red dress while he was rubbing. I could see a nice-sized bulge starting to form in his pants, and that’s when I knew I had him! He looked up and noticed me, noticing him.

I let a faint smile play around the edges of my mouth.

He returned it, and asked if I’d like to get out of there with him. Well, that was easy enough! I thought to myself. I nodded back towards the table, where he had left his little blonde package for the night. “What about your girlfriend?” I coyly asked him. He laughed out loud, saying she was “just a friend” and that she would be fine there on her own.

He took my arm and we slipped out into the chilly night air. I knew his expensive sports car was parked just around the corner of the building, but as I headed automatically in that direction, he pulled me back, against the side of the building, pinning me there, looking down into my eyes. My heart was racing as his face moved in closer; he leaned in, lips touching mine, and gave me a surprisingly gentle, slow, VERY sensual kiss! Followed up by the admission that he was a married man, but unhappily so. He asked if that was a problem, his lips still moving against mine.

I told him that actually – it was a turn on. I admitted to him that the fact he was a cheating husband turned me on even more! Smiled as I whispered against his lips that my panties were drenched right now, thinking about stealing his married cock away from his wife AND his girlfriend for the night!

He smiled at my naughty words, and led me by the hand to his car, opening the passenger side door and tucking me inside.

Once inside himself, he leaned in towards me. I thought he was going to kiss me again, but instead, his head dipped lower, and his lips pressed themselves against my chest, right above my perfect breasts. He actually moaned softly, kissing all the way across my cleavage, before righting himself in his seat. He smiled winningly at me, started the car, and we drove off into the night. Destination unknown, but intentions clearly defined.

Stay tuned for Part 2 of the case of the cheating husband to find out if this sexy P.I. gets her guy!