Playing With Sex Toys And A Sex Toy Salesman* 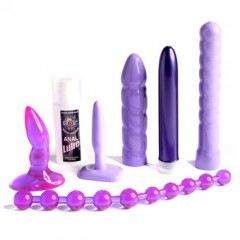 So I wandered down the aisles looking at all the Sex Toys. Picking up a butt plug then telling myself I didn’t need it before grabbing a ball gag. I made myself put that back too then found a cute pink vibe that I just had to have. Held it in my hand and thought of how good it would feel in me when shiny handcuffs caught my eye. I went over to them and grabbed a silver pair that were heavy and good quality. I could have so much fun with them and the sales guy thought so too because he came over to me.

“Like these, do you?” he asked, grabbing the handcuffs from me and holding them up.

He was smirking at me and he had a sexy little look on his face. “Yeah but I’m not sure how to use them,” I told him, playing the innocent virgin which none of us believed. “Well, why don’t you follow me and I’ll give you a demonstration?” He went to the back of the store and I followed him like he knew I would. He unsnapped them and told me to turn around which I did. Then he pushed my face down over the counter. Pulled my arms behind my back, handcuffing my arms behind me.

He grabbed my skirt and shoved it up while tugging down my panties and I felt them fall to my ankles. He kicked my legs apart and ran his hands over my ass. Then slipped a hand between my legs. He rubbed a finger over my pussy and I pushed back. Hoping he’d finger me. Instead, he teased me by giving me little touches until I was soaking wet when he stopped and I heard a zipper go down. He pushed his dick into me and my pussy stretched around him as the inches went in.

I moaned and he put one hand on top of mine, holding the chain of the handcuffs and making them press into me. The metal felt cold and the naughtiness of doing this when anyone could walk in and catch us made me get so excited. He started fucking me and the edge of the counter hit my waist every time he thrust forward, making me feel all bruised. His hand leaned on me and the handcuffs bit into my back as he panted behind me.

He kept going and I felt so wet down there as my pussy gushed and juices slipped out of me.