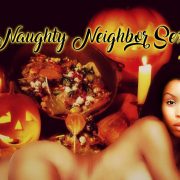 Naughty neighbor sex was ultimately going to happen.  Since there has always been this crazy chemistry between my neighbor and I. However, I never expected it to happen on Halloween.  I guess he had just been yearning for his opportunity to stroke this ebony pussy from day one. Let me start from the beginning.

New to the neighborhood!

They moved to the house directly across the street from mine.  It was early summer so I watched through my partially opened blinds as he and his friends unpacked their belongings from the moving truck.   His friends all attractive in their own way, but the new neighbor stood out. So I kept my eye on him. After they had unpacked the moving truck the wife and kids pulled up.   I continued to watch my new neighbors interact with each other throughout the day and they seemed to be nice enough.

About 3 weeks after they moved in, I was walking my dog and saw them both out in their front yard.  Not wanting to overthink it, I decided that this would be the perfect day to introduce myself. Walking down there driveway, with my hand extended and wearing a warm smile I introduce myself as there neighbor across the street.  They both were pleasant and openly greeted me. Now while her smiles were warm and friendly, he was practically drooling. I literally wanted to wipe the corners of his mouth and hide his hard dick for him. Luckily for him, his house phone began to ring and he was able to run that hard cock in the house to answer it.  She explained that he worked from home and was expecting a call. Excusing myself, I walked back across the street thinking about my neighbor’s hard cock.

Naughty neighbor sex in the making!

Throughout the summer and into the fall there were many occasions that made naughty neighbor sex inevitable.  Every time we came into contact I could feel the heat. Since he worked from home, I always saw him and the kids more than I saw his wife.  For Labor Day his wife was away with family, so I invited him to a cookout. We enjoyed chatting and hanging out. I could tell he wanted me, but I didn’t give in.  Instead, I seduced and teased and sent him home to jerk off thinking about me. There were several other times that we were alone and inches away from a hot fuck but I never gave in.

My Halloween decorations had been up for a couple of weeks and I was ready.  I enjoy dressing up and passing out candy for the small group of kids in our community.   Since Halloween that year was on a Wednesday, there would not be much else going on. So on Halloween night, I dressed in my black bodysuit,  complete with cat ears and tail to become the sexy ebony pussy that gave out the sweet treats. It was so much fun to watch parents and kids come dressed in their costumes, smiling as I passed out treats.

About 9 PM, I turned off the porch light.  I figured most of the kids had come and gotten candy.  I began to get undressed and settle down for the night.  When I heard the doorbell, I looked at the time it was 9:45, wrapping my robe around me I walked with my candy bowl to the door.  However, when I opened it it was my naughty neighbor. Sporting a batman costume and a major hard-on. At that point, I knew that is was not the candy in my bowl he wanted.  He wanted this sweet ebony pussy and I was going to give it to him.

Locking the door behind him, he followed me into the living room.   I let my robe drop to the floor so he could see the full body of this ebony goddess.  Arching my back, I leaned over the back on the leather couch. He dropped to the floor behind me and began to taste the sweet treats that he had been craving for months.   Licking this pretty brown ebony ass and pussy until my pussy was begging to be fucked.

Sliding the tights to his Batman costume down, he unleashed his thick and hard cock.   He lifted me up on the back of the couch and slid his dick up and down my slit. I was so wet you could hear it as he played with my pussy with his fleshy head.  I wanted it so bad that I grabbed him pulling him deeper inside of me. He fucked my ebony pussy until he both came.

Do you crave more of this Sweet Ebony Pussy?  You just need the right ebony Goddess to fulfill your naughty neighbor sex fantasy!  I am just a call away. Camille 888-340-8794