Memorable Monday – Cheating Sex Stories, How It All Began ♕ 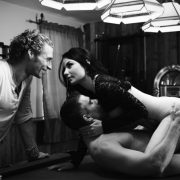 Memorable Monday – Cheating Sex Stories, How It All Began

It’s Memorable Monday – My favorite day of the week where I rehash a memorable call as an adult chat operator. In this call, my boyfriend has been begging to watch me get fucked by another.  On his birthday I decided to fulfill his fantasy.  Does this have the result he desires or does this event lead to cheating sex stories?

Brian & I are sitting on the couch watching the game.  After spending the entire day together & went to the arcade to play some games & race go-carts.  After we got home, we ordered pizza & were watching the game while relaxing with a few beers.

Finally, the doorbell rang.  Brian jumped up to answer it questioning who it might be.  I just smiled nervously, suddenly extremely nervous now that the big moment was here!  Brian walks back in the room with David trailing behind him. “Hey, Babe.  David says you have something to give him?” Brian asks with confusion.

“Well, something like that,” I said as I nervously cleared my throat & started to stand.  “It’s more like there’s something that HE has to give ME.”

Walking over & stood between the guys.  Glancing up questioningly up at David & he gave me an encouraging nod.  Turning to Brian & put my hands on his chest.  “Well, babe.  You’ve been begging to watch me with another guy & David has agreed to grant your birthday wish.”

Preparing To Be Watched For The First Time

Brian looked between David & me with utter shock.  “Is this still what you want?” I asked.

“Hell yeah it is,” he exclaimed.  Brian grabbed me & gave me a passionate kiss before going to sit on the couch. I saw him take out his phone & set it up on the coffee table facing me. David took my arm & pulled me back against him. He began kissing my neck as his fingers slipped under my shirt to caress my belly. “Don’t be nervous, Kass,” he said, “Let’s give him a show to remember.” I looked at Brian one last time & saw how into it he was already. I nodded, closed my eyes, & leaned further into David.

Cheating Sex Stories – The Point Of No Return

David began slowly caressing me & undressing me. When I was finally fully naked, he pushed me to my knees. I sat & looked at him as he pulled out his cock. I looked nervously back at Brian but there was a devilish glint in his eye. He was so excited! I turned back to David & eyed his cock while licking my lips.

“Little girl likes what she sees, does she?” he murmured. I licked my lips again & nodded. He nudged the tip against my lips while telling me to open wide. I wasn’t sure he would fit as I opened my mouth as wide as I could. My jaw actually popped as he began to slide his cock along my tongue. He continued pressing toward the back of my throat giving me no time at all to adjust to his huge size.

When I started to gag, he wrapped his fist in my hair & held me tight, not allowing me to move an inch. My eyes were watering & I could feel the mascara tracks running down my face. When I didn’t think I could take any more, David finally pulled back. He continued to slide in & out of my mouth until I thought my mouth was going to lock open before finally pulling out.

David laid back on the floor & instructed me to straddle his face. I did as he instructed & he licked every inch of my tiny, wet little pussy. My head was thrown back in ecstasy as he sucked my clit into his mouth, making my body shake. My legs were shaking & I could no longer support myself on my knees. Falling forward onto my elbows, I grabbed David’s cock & began to stroke him.

I looked up & met Brian’s gaze as I leisurely licked up and down his cock & sucked David’s balls into my mouth. Just then, he brought me to a screaming climax as I came all over his face. He continued grinding his beard into my pussy until I begged him to stop, pleading that I couldn’t take any more. Brian now had his hand in his pants & was stroking his cock as he watched me hungrily.

I crawled down the length of David until his cock was nestled in the Vee of my pussy. I looked at Brian & said, “Well, you wanted to watch me with another man. How about you come to guide David’s nice hard cock into my tight little pussy so I can give you what you wanted?” Brian practically lunged off the couch in his excitement to get to us. He was so ready to help me make a few hot cheating sex stories.

Without giving David a look, he wrapped that big masculine hand around his friend’s cock. He wrapped his other hand around the back of my neck as he kissed me & raised me up. He then continued to kiss me as he lowered me back down onto David’s cock. When he was buried balls deep inside of me, he slapped my ass & told me to ride him.

Keeping eye contact with Brian, I slowly began to lift up & down trying to adjust to David’s huge size. David was having no part of me going slow, however, & wrapped his hands around my hips. He began slamming me down faster & faster as he thrust up. I could hardly keep up with the pace so I bent over, grabbed his thighs, closed my eyes, & threw my head back determined to take all I could.

What Do We Do Now That The Deed Is Done?

Brian carried me to the couch & wrapped me in a blanket. He went back & held out his hand to David to help him up. Both men got dressed & Brian clapped him on the back, thanking him for his birthday gift. David chuckled & said that no thanks were necessary & the pleasure was all his. After Brian walked him out, he returned to me.