Massive Marine Cock: Two Dicks is Always Better than One* 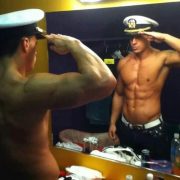 Massive Marine Cock: Two Dicks is Always Better than One

You all know I’m a whore for a man in uniform, and what better uniform is there than a U.S Marine? My husband was out of town again and Breezy has been avoiding me, so I decided to treat myself to a massive marine cock or two. I got myself ready in my usual fashion, getting in the tightest and shortest dress and highest heels I could find, I needed my ass to pop and my legs to look long.

I made my way through the gates and into the bar on base.

The music was blasting but I could hear this loud-mouthed Marine over it all. I downed my shot and made my way over to him; I could see him eye-fucking me up and down, at least I hope that’s why his massive Marine cock was showing. Making my way over to the table, I hopped up onto the felt. Sliding two balls in between my legs, slowly rolling them back and forth through my hands.

He made his way closer to me and we started a little small talk as I ran my fingers up and down his pool cue.

I could see his throat tighten as I challenged him to a game. Since he was such a hustler it wouldn’t be hard for him to beat me, in more ways than one. The challenge was made and the terms were set. If this loud-mouthed Marine won, I’d suck his dick in front of all his friends. However, if I won he had to eat my ass in the place and time of my choosing. Of course, he was a cocky Marine so I knew he would quickly agree. What I may have failed to mention is that I’ve been a professional pool player for years.

Obviously, that’s how I got so good with a big stick and balls.

The game started with some friendly flirting, he’d slide the stick between my legs as I was focusing on the shot. Sweat was pouring down his face as friends teased him. Sinking ball after ball I could see him getting pissed, but not saying a word. This random long-legged exotic dame was running the table on him, but little did he know he’d be running that dick on me later. As I lined up that last shot I looked around at all of the people standing around and winked, smiled, and shut my eyes.

The bar went silent and I heard the 8-ball sink. As I opened my eyes to watch his friends laugh at him, I saw his pride get hurt.

Only a little, but little did he know I’d make it up to him with an evening he wouldn’t forget. Making my way to him, “a deal is a deal.” I winked and told him, “but first drinks.” Mr. Massive Marine cock would slide his hand up my dress expecting me to jump or push it away, but secretly I was wanting him to slide it higher while we were sitting right there. Finally, we finished up our drinks and made our way to his barracks.

He lost our bet and he was going to eat my ass, but not before I made his head spin.

By the time we got to his door, we were tongue deep in each other’s throats. His hand slid up my dress and into my dripping cunt as I slid my hand down his pants to his massive cock. Marines always have the biggest cocks, and leave a lasting impression. All of a sudden we came crashing through the door into his room. Ripping off our clothes, I threw him on the bed and pulled his massive Marine cock out of his pants. Opening as wide as I could, I shoved this massive Marine cock as far into my throat as possible.

Of course, I made sure to gag myself, covering his massive marine cock in a thick spit.

I pulled it out and started to jerk him off. He squirmed as I used both hands while sliding his balls into my mouth. Mr. Marine wanted to show off his strength by picking me up and throwing me on his bed. He threw my legs onto his shoulders and shoved his tongue into my ass. He moved his tongue from my ass to my pussy and then my favorite, sucking on my clit. Just as I was about to cum, I heard someone clear their throat. It was Mr. Marine’s roommate, just sitting there wondering when we were going to notice him.

To both of their surprise, I  smiled, winked, and waved the roomie over.

This was going to be a night that none of us would forget. As Mr. Marine went back to eating my ass, I pulled the roomie Marine’s cock out of his pants and began to suck as hard as I could. After a few strokes while standing up we fell back on the bed, giving his roomie a clear entry to my asshole.

As I held my ass cheeks apart, I could feel roomie spit down my ass crack.

Moaning was hardly an option right at this moment. It seemed yelling was about the only thing I could do.

I slid both cocks into my mouth at the same time to make sure I could swallow every last drop. They each grabbed the back of my head and shoved their still hard and throbbing cocks back into my throat. As I reached up to caress their massive balls, I made sure to suck out every last drop.

We all got dressed and I made my exit from their barracks room, but not before I slid my number to them. Each needed to know they could call me anytime, and that I had a few girlfriends who would like them too.