Licking In The Kitchen.* 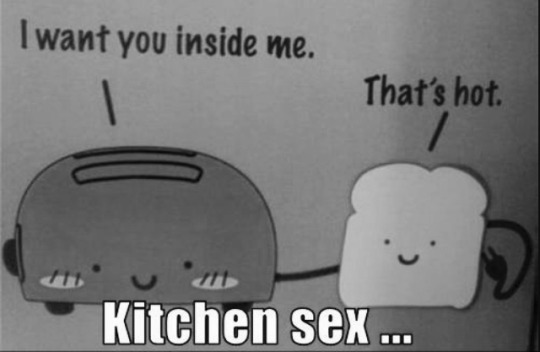 Licking In The Kitchen

I hate baking. What am I? A frumpy housewife who has to make crap for my kid’s bake sale at school? No, I’m not. That’s why I go to a bakery for cakes.  The kitchen is for other things.  This has worked great for me until recently when my cousin was having a birthday party and thought it would be fun to do it pot luck style. My lazy cousin came up with the idea at the last minute and said it would be nice if I could bring a dessert. It was too late for me to put in an order at the bakery so I ended up baking a cake. Well… I tried to.

I threw a tub of icing and some bowls on the kitchen table then sat down. Then I opened my laptop and started searching for an easy recipe. My boyfriend thought it would be funny to watch me struggle so he sat across from me and waited for me to lose my mind. The recipes all seemed too complicated and I got frustrated. My boyfriend got up and stood behind me. He told me to just relax, it wasn’t a big deal and started to rub my shoulders.

He’s right and I loosened up as he worked my muscles.

He slid his hands forward and over my breasts. He undid my top and pulled down my bra. I leaned back as he kneaded my nipple between his fingers. It felt good and I wanted more of him. I moved his hands away and I got up. I undid my jeans and stepped out of them before taking my top and bra off. He saw what I wanted and quickly got undressed. I sat on the edge of the table and kicked the chair away so I was facing him. He moved closer to me and put his hands on either side of me. We kissed and I leaned back. My hand hit the tub of icing and I got a fun idea.

I grabbed the tub scooped some icing out with my fingers. I rubbed some around my nipple and pulled my boyfriend down. Kept my fingers wrapped in his hair as he held my breast in his hand. His fingers felt warm around me as he slowly moved his tongue over me. He licked up the icing then put his mouth over my nipple. He sucked on it as he slid a hand down. His fingers pressed against my lips and I parted my legs for him. He pushed two fingers inside of me and started thrusting them while he kept sucking on my breast.

It felt good and I moved against them.

He wrapped his fingers around my clit and started working it.  I sat there and let his fingers work their magic until I felt an orgasm coming then I took his hand away. I reached down and grabbed his dick. It was slick from pre-cum. I rubbed my thumb over the slit smearing the pre-cum over it then held him as I got into a better position. He put his hands on my hips and slowly pushed into me. When he was in deep I wrapped my legs around him, holding him in place.

He started thrusting back and forth. It felt good and I leaned closer to him. I put my arm around his neck and rested my head on his shoulders. I relaxed and let my body move with him. When his breathing started to get heavier I knew he was getting close. I rocked against him, bringing myself closer to an orgasm. He moved faster and I came. I loosened my hold on him and tried to catch my breath. He kept going and it was too much for my sensitive clit. I came again and lightly bit his shoulder.

He pulled out of me and I got off of the table. I looked at the baking items scattered around, thought “Fuck it, my cousin’s getting day old muffins from Walmart.” and dragged my boyfriend upstairs so we could spend the rest of the day enjoying each other.

Wanna see me getting fucked in the kitchen?