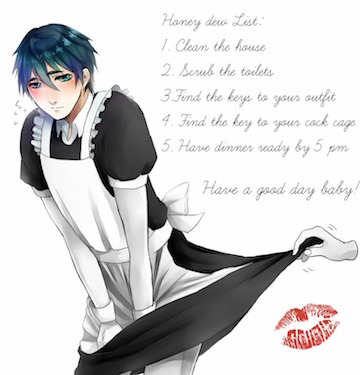 The lazy bastard just laid there all the time since he lost his job 6 months ago. He was good for nothing! The house was always a mess, and Jason was glued to his Xbox like a zombie. That night I made a nice dinner and spiked his tea with a sleep aid that was always very strong on him.

The next morning Jason awoke to find he was dressed in a french maids outfit, complete with stocking and garter. He could feel the silky panties brushing over….wait…holy shit he was in a cock cage!  He even sported a pair of high heels and make up you could not remove!

Panicked he ran to the mirror for a full view. He looked like a sad attempt at being a sexy maid. On the mirror he found a little note from his wife. It stated that she was tired of him laying around doing shit all day. She wanted him to clean the house. She stated that all his clothing was locked onto him, including the cock cage. She said the only way to find the keys was to clean up the house. They were hidden among the mess. His wife also required dinner to be made by 5 o’clock.

A very pissed off sad looking Jason got to work cleaning up the house. He spent hours first just trying to find the keys. To no avail he decided to just clean up. he found the first key that was the master to the outfits locks…only he had little time to change and make dinner all before 5. So he kept cleaning up.

He had one of his wife’s favorite meals in the oven and went back to searching for the cock cage key. He was getting worried that he still hadn’t found it. The house was immaculate and couldn’t possibly get any cleaner. When his wife returned she was very happy to see he had applied himself to the tasks. She asked why he was still dressed that way if he had found the key, Jason admitted he had run short on time and didn’t want her angry. He asked were the cage keys were though…his wife just laughed and said he would just have to keep searching for it…she told him to check the bedroom after dinner.

Jason sat down and he and his wife shared a nice meal and he had forgotten about how he was dressed.

Find out if he ever found his cage keys! Or call me for part 2