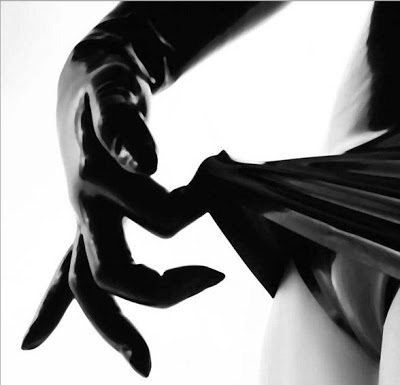 I looked like a latex Goddess last night in my black latex catsuit with matching gloves. Too bad you didn’t see me in it; that pleasure went to Jordan.
I left my door open for him and waited in the bedroom for him to find me. When I heard him coming up the stairs I stood in the middle of the room and struck a pose, standing there with my hands on my hips. I caught a glimpse of myself in the mirror and thought I looked fucking hot. Jordan came into the room and stopped when he saw me as if he couldn’t believe what he was seeing. I’d been waiting to seduce him for a long time in this fetish latex costume, and now I had him right where I wanted him.  We were past the adult chat, taboo fetish fun.  It was time for the cat to play with its prey!

He came over to me, pulling my clothes off as he got closer and I helped yank his boxers off. He was already starting to get hard and I leaned close to him, pressing my body against his as I kissed him. Then he grabbed my head and kissed me back hard while his other hand moved across my back. I could feel him rubbing his dick on me and knew that all he wanted was to feel the latex. I moved away from him and cupped my hands over my breasts. Then I slid my hand over my body, going from my breasts and down to my pussy. Grabbed the zipper at the crotch and undid it just enough to expose my pussy.

His eyes went right to that smooth patch of skin framed by black latex and his mouth fell open.

I pushed him onto his back and put my latex glove-covered hand around his dick. I gave it a few strokes to tease him and a drop of pre-cum leaked out of his slit. Scooped it up with my finger and licked it as he watched. I then climbed on top of him, practically lying on him, and rubbed my latex-covered body over his naked one and the latex softly tugged at his skin. He groaned and moved his hips, his dick was so hard it must have been killing him. I straightened up and positioned myself over his dick, guiding him into me.

My pussy stretched around him as he filled me and I moaned as he went in deep. He put his hands on the top of my thighs and rubbed them, needing to keep as much contact as possible with the latex. I began to ride him, his dick sliding past my walls as I got even wetter. I went faster, my pussy aching as it needed more. Suddenly he rolled me onto my back, his fingers slipping over the latex as he tried to grab my hips. He grunted and groaned on top of me as he pounded my soaking wet pussy, slamming me into the mattress.

It was so hot having him go at me like this and I moved with him, my orgasm getting close.

He groaned a “Fuck.” and came. I arched my hips up as he gave a few last shuddered thrusts and I came as well. So hard in fact, that my normal hot squirting was super-sized this time. He stayed in me and rolled us onto our sides, putting my leg over his. He nuzzled his face over my latex-covered breasts and laid there until he started to get soft. But I wasn’t about to have that! I wanted MORE! ‘Come on big boy! It’s time for round two! I want a Pre-Thanksgiving stuffing from you’, as I smiled and slide down to resuscitate his cock!