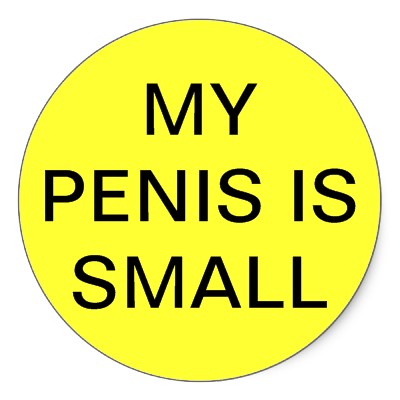 A Small Dick is a good reason for a relationship not to last.

I went out with Rob and his Small Dick last year but it didn’t last. I lost interest when he wouldn’t have sex with me.

Yeah, that’s right. He didn’t want to sleep with me. I have needs and if you can’t give me what I need then you need to go. Anyways, he sent me an email asking if I wanted to get together. I wanted to know why he was the only man alive who didn’t want to fuck me so I agreed to meet him.

We met at a restaurant for dinner. It wasn’t until the end of the meal that he said he wanted to talk about why things didn’t work out between us. I suggested going back to my place since my boyfriend was at his place tonight.

We went home and sat on the couch. After a few false starts, he finally blurted out “I have a Small Dick.” I never thought I’d be speechless. It lasted about 30 seconds before curiosity kicked in.

I asked him how small and he mumbled something. It must be  Small Dick if he couldn’t even say it out loud. I had to see his Baby Dick now.

I crouched in front of him and started tugging his zipper down. He put his hands on mine and tried to stop me but I slapped them away. I slipped my fingers through the opening and I felt nothing but fabric and a small bulge. Looking at him he couldn’t even face me. I told him to stand up. As he did I pulled his pants down.

“I know which dick is worthy of my pussy,” I told him as I got on the bed.

I opened my pussy lips and slipped the tip inside.  Rob’s tiny dick was standing straight up now. Poor guy wasn’t a shower or a grower.

Rob didn’t answer; he kept his head down while his fingers jerked at his Itsy Bitsy non-existent Small Dick.

“You’ll never be able to fuck me like that. How could anyone woman ever be satisfied with you when this piece of rubber does a better job than you ever could?” I asked him before reaching over and knocking his hand off his dick.