Between A Husband and Wife 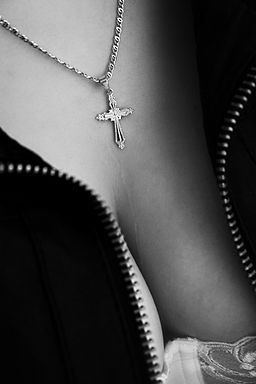 Between A Husband and Wife

I asked them to have a seat on my couch and I went into the kitchen to make up some drinks. I did not ask them what they wanted. I figured I could make them a nice strong drink and hope they will not say anything. It was a young man and his blushing new wife. She had dark brown hair and rosy flushed cheeks. She was very innocent and shy, I doubt she has ever had one good fuck her entire life. Oh, and her husband, just as uptight.

I handed them their drink’s and they both made a face of disgust as they took a sip. They told me that they do not drink. I told them that they were guests in my house and it would be very rude of them not to take the drink. They both looked at each other and took another sip. I sat patently as the husband read me a few Bible verses and prayed for my salvation. When he was finished he asked if I had any question’s for him. I nodded my head yes.

“Now,” I said, “What I want to know is; what does the Bible say about sexual pleasure between a man and a wife?”

“Well,” The husband said, “As long as it is between a husband and wife.”

I giggled, my hand was already up his wife’s skirt and I was caressing her wet cunt. “I better stay between you guys then shouldn’t I?”

They came back to my house a few month’s later. She was glowing with a giant pregnant belly. All I have to say is that pregnant women fuck like freak’s. Some of the best sex of my life.