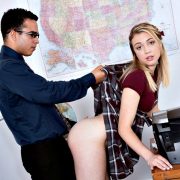 Hot young grad student outrageously cock-teases her sex-starved psychology advisor beyond the point of no return; wanna guess what happens next?

Hot young grad student: Yes, that’s me! Stories like these make your cock throb and your heart pound, admit it!  Furthermore, I know that the mere thought of getting your hands on a hot piece of ass like me is enough to make you explode. It’s true, I teased my doctoral program advisor until I eventually made him lose control. After all, I’d been obsessed with him for a long time.

Ever since I took that first grad-level sex therapy course of his, he kept showing up in my fantasies. Indeed, I just couldn’t stop lusting after him! Not only was I fascinated by the provocative subject matter, but there was something about how the tall, athletic 40-ish professor captured everyone’s attention.

At the time, I didn’t understand why I couldn’t stop thinking about him. I’ll admit, I felt completely obsessed!

My young, college girl pussy tingled each time I heard Dr. Garcia’s deep, sexy voice. I couldn’t stop watching him as he walked back and forth while he lectured. All the girls and probably even some of the boys whispered about how sexy our professor was. Every night, I dreamt about kneeling at his feet to do whatever he wanted. Seriously, I couldn’t get him out of my mind!

As a result, this hot young grad student teased him at every opportunity!

First of all, I wore the skimpiest outfits I could get away with. Because Arizona’s climate is still fairly warm (change that; hot AF!), I had a good excuse, right? Second, there was my over-the-top behavior in class. While he lectured us about human sexual anatomy and the latest psychological theories and techniques, I’d give him teasing glances beneath half-lowered lashes. Next, I tormented him with my extremely short skirts and tiny, midriff-bearing tops that were just barely street legal.

As I left the psychology lab at closing time one evening, I nearly ran into him as I walked down the darkened hallway. Pretending to lose my balance, I half-fell against him. As I expected, he automatically gripped my upper arms with his strong hands in an effort to steady me. Omg, even the masculine scent of him was nearly enough to bring me to my knees. Spicy and bracing with hints of something darker, I couldn’t stop breathing him in.

Finding myself pressed against my professor’s hard, muscled body, I realized that he’d nestled his raging hard-on against my pussy mound. A mistake? Hell, no!

Almost before I’d managed to comprehend that our attraction was mutual, Dr. Garcia nearly dragged me across the hallway and into a deserted office. I gasped in shock as he roughly yanked up my skirt and bent me over a desk. Then, he yanked down my black, lacy panties to my knees as he growled,

“If you’re going to act like a dirty little puta, expect me to treat you like one.”

Oh fuck, did he just call me a WHORE? I spoke enough Spanish to understand that’s exactly what he’d just said. Rather than feeling insulted, his words ramped up my arousal to a whole new level. As a result, I found myself panting in need like a bitch in heat. Damn, what was it about this man? While this wasn’t the first time I’d been in a forced sex situation, I’d never played with any of my grad school instructors before, and certainly not a college advisor!

“Your cunt is already drenched for me, isn’t it, little puta…” my professor purred wickedly.

Wasting no time, Dr. Garcia roughly plunged deep into my juicy cunt, making me cry out in pained pleasure. Since he didn’t even take the time to ease himself into my incredibly tight, slick fuckhole, my pussy fought him at first. Nevertheless, I couldn’t believe how amazing it felt! Ignoring my token protests, he worked his amazingly huge dick in and out of my unquestionably wet, throbbing cunt. As a result, I moaned loudly as he buried himself inside me to the hilt and began to thrust!

Grabbing the front of my cropped red tank top, he jerked it down until my barely legal college girl titties spilled out.

As he cupped and squeezed each breast hard enough to make me groan and whimper, I panted as he brutally rammed his way in and out of my defenseless pussy. I screamed with intense pleasure as he took me hard. Suddenly, he pulled out of my dripping sex as I whimpered in disappointment, needing more. What was he doing??? As he hoisted me onto the desk and pushed me onto my back, I was about to find out!

What happened next to this hot young grad student? Call my phone sex hotline to experience the ULTIMATE in extreme roleplay with absolutely no limits!