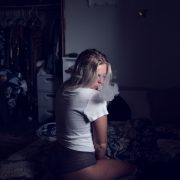 You need a hot blonde girl like me and that’s exactly what you get in part two storytime!

The young man definitely wasn’t expecting Olivia to be so naughty. But he acted properly on it. He moved closer to her, placing his palm on her naked thigh as he leaned in to kiss her. Then he placed his lips on hers gently, his hands sliding down as he carefully cupped her butt. Next, he tugged at her lower lip. The hot blonde girl parting her lips as Matt thrust his tongue into her mouth. He laid her back on the couch, moving on top of her and settling in between her legs as they kept on kissing.

Their tongues went back and forth. They started twirling and curling with each other in the most sumptuous French kiss as their mouths feasted on each other. Matt had to admit, she was really a good kisser. Their hands began to roam as things heated up between them. Olivia’s hands sliding underneath his loose cotton shirt as she stripped it off. She rubbed her slender fingers all over his ripped torso as they kept on kissing. The bulge in between his legs growing bigger and bigger until he reached full erection.

So he lifted her small blouse over her head, his fingers reaching behind her and unhooking her bra as her boobs fell out. She had gorgeous titties, her pink puffy nipples standing proudly on top her mounds of flesh and begging for attention. He kissed down to her neck, her head tilting to one side and giving him room to explore.

“Hmm”, she moaned gently as he took a nipple to his mouth. His mouth interchanging between the nipples as he pleasured her. He stripped away their remaining clothes, both of them were stark naked now.

“Yes…that’s it”, by now she was wet and sated with desire, and by the time he thrust his erect cock into her, it was just pure bliss from there on out.

She wrapped her legs tight around him as he settled into her, his huge cock filling her up and stretching her out completely.

Next, he started out slowly, his gentle strokes synchronizing with her moans as their energies flowed into each other. She dug her fingers into his back as his strokes got faster, her moans getting louder as he steadied the rhythm.

And then their wet bodies slammed together, Matt pounding her engorged pussy with reckless abandon as they made love. He kept going at her, faster and harder as the passion consumed both of them. He went even harder. So her moans cheering him on as he drove her towards the edge.

“Fuck! Yes!”, she voiced out as she hit her peak, her body vibrating with intensity as her juices flowed out freely.  And Matt kept going until he couldn’t go on any longer, his muscles flexing and sharp grunts escaping his lips as he emptied his seed into her insides.

“We should do that more often”, Olivia smiled as he slid his limp cock out of her, he was right, she was really the hot blonde girl he’s been dreaming about.

Call me for the best phone sex!

One Reply to “Hot Blonde Girl to Fulfill Your Next Door Neighbor Fantasies: Part Two ♕”