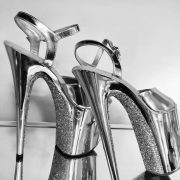 It all spawned from the interview process honestly. I didn’t expect for the owner to be such a handsome older guy. That was the moment I became THE horny cocktail waitress. He looked me over from head to toe. I was wearing a tight bandage dress in black with matching black heels and my hair in a high ponytail. A friend had tipped me off that the uniform was super similar and you know how the saying goes- dress for the job you want! My future boss man’s eyes skimmed my tight curvy body and he commented that I would surely look great in the issued outfit for my position. Alas, Big Boss Man wanted to see it on me to make sure. He handed me the dress which was practically identical to what I was wearing. Except- it was at least three whole sizes smaller.

Big Boss Man had already made me aware that I was to call him that. Not Mr. So-and-So or by his first name- He had a preference for Big Boss Man. I nodded, realizing almost immediately that he would be somewhat of a Daddy Dom figure in my life soon enough. I stood in front of him in the dress, feeling frozen while his eyes dragged down my body once more. He stopped at my shoes making a face of disgust. BBM turned around and reached out to me with a pair of 6″ clear stripper heels with no straps.

I nodded, removing my shoes and replacing them with the heels he had provided. My petite size 7 feet slide into the shoes comfortably but I did wonder how I was to walk in them all night long carrying a tray of drinks. The look of bewilderment was apparent on my face obviously because quickly Big Boss Man instructed that I would spend more time on my back and knees. Lightening shot down my spine.

Something about his voice and temperament awoken the submissive whore within me. I knew at that point that I was his, there was no way around it.

BBM ordered me to get down on to my knees and show him I was grateful.

I started to just crouch down and he slapped my nearly bare ass. Wearing a g-string was maybe not the best decision for today but I didn’t want to have a panty-line showing through my dress for the interview.

His large veiny cock popped out of his slacks with no effort at all.

I wrapped my lips around it and started sucking him hard while pumping almost as if my life depended on it. I was so hungry to please him and for him to keep me. Big Boss Man’s hand was wrapped around my ponytail several times and he used it to control my head fiercely. If and when I gagged, he would pull me down harder on to his dick- ordering me to stick my tongue out so I wouldn’t throw up “like an unprofessional”.

Just as he was about to slide into me, I noticed the chef and bar manager were now there. Cocks out and jacking off, they were ready for their turns too. As it turns out, this is a multi-step interview process! 😉

Want to hear what happens next? Call me and I’ll give you all the details over a steamy phone sex session. How else are you going to find out if I got hired?