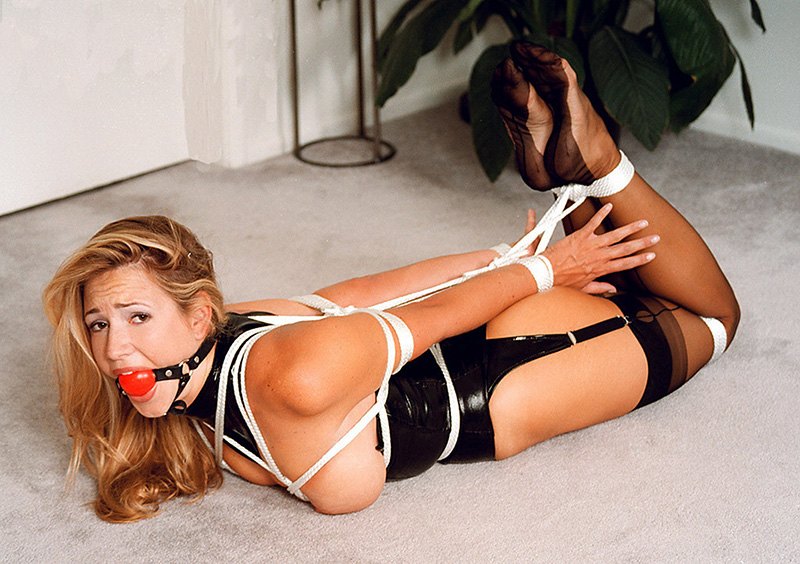 Jillian gets hog tied and fucked!

Helpless and at the mercy of someone else? Ever been hogtied? Yeah, that was me after my date with Dave and it was great. I knew right from the beginning that Dave he was kinky; one of my girlfriends used to go out with him so I’d heard all about his freakishness. On our first date, we just kissed and made out a little. On our second date, he brought out a length of rope, showed it to me, and asked how open-minded I was. I told him a little kinky fun was good with me and we decided on a safety word.

Dave made me lie on my stomach in the middle of the bed.

I felt him get on the bed behind me and I looked over my shoulder at him. He gently pushed my head down towards the mattress and told me to keep my eyes closed; the only thing I had to do was lie there and let him take control of the situation. He pulled my arms back and tied them together. The rope felt rough against my skin and it bit into me as he gave it a sharp yank then let the loose end fall on me.

He left it there as he spread my legs wide apart and bent them at the knee, pushing them towards my back. He picked up the rope and tied it around my ankles, connecting them to my wrists. When he was done I wriggled around and found that he’d done a really good job of tying me up, there was no way I could get loose from being hog-tied.

I heard him move away and I had to remind myself not to look up.

I heard a click then a buzzing noise and knew it was a vibrator. So I twitched as it touched my ass crack then slid down to my perineum. He held it there for a few seconds and I felt my pussy start to get wet. Then he moved it to my pussy and slowly pushed the tip inside. He thrust it in and out of me but never put it more than halfway inside. He was doing it on purpose, trying to drive me crazy. It worked and I had to beg him to fuck me with it because I needed more, my pussy was dying for a pounding.