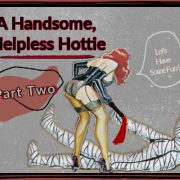 It had been a very bad week.  My landlord evicted me from my apartment, my boyfriend broke up with me by text message and I lost my job.  A truly terrible week, for sure. But then, somehow, I found myself interviewing for a job in the home of my former company’s CEO.  He had just been in a terrible skiing accident that left him with two broken arms and two broken legs and apparently in need of an aide.

But why me?  The handsome helpless hottie hadn’t taken his eyes off of my big tits and my nice round ass once since I’d been there.  That’s why.

He was all mine

Yes, things were definitely looking up for me. I had interviewed on Friday and now it was Monday morning and I was starting my new job.  The same medical aide as a few days ago, Jeff, answered the door. He said that he was there every morning and evening to do all the medical stuff and that the rest of the time he was all mine.  With that, he left for the day.

I found Mr. Buckingham in his home office, sitting in his wheelchair and staring helplessly at his desk.  He couldn’t even really see his computer screen, much less type anything. He grumpily told me to come and sit at his desk and type up some work emails that he wanted to send.  Ten boring minutes later, I was sick of being my handsome helpless hottie’s typist. I turned around in his desk chair and said: “let’s have some fun!”

An even better view

He went from grumpy to irritated at my question and said sarcastically, “yes, let’s go play some tennis or take a swim in the pool!”  And I explained that my type of fun was much better. I noticed that when I was sitting at his desk, he had managed to angle himself in a way that gave him a perfect view of my cleavage.  So, the first thing I did was undo a button on my tight blouse. “Is this what you were trying to see?”, I asked the handsome helpless hottie.

He didn’t look one bit embarrassed or sorry when he confirmed that yes, that was exactly what he wanted to see.  So, I stood very close to his wheelchair but just out of his reach. Unbuttoning my blouse some more, I stayed only inches away from him.  I did a seductive dance for him and took off my blouse completely.

He was already very excited, I suspected.   I confirmed this when I spotted a nice hard-on in his pants.  I took one finger and ran it up and down his erection through his shorts. Of course, his cock felt massive. I expected no less, given his usually dominant presence.

Handsome helpless hottie – right where I want him

He got even harder under my finger but I didn’t give him any more than that.  Since he wasn’t able to move much at all, he was completely at my mercy. He couldn’t even come close to touching his own dick right now, so I was going to love this. Teasing and denying men excites me so much.

Then, I decided that his shorts were just in the way. I wasn’t sure how Jeff got them on him this morning, but I didn’t have the patience to figure it out.  I got a pair of scissors from his desk and started to cut them off of him.  He looked alarmed as I came close to him with scissors but I just laughed and told him to relax.

When I was finished freeing his amazingly still hard cock, I stepped back to take a look. Ten inches at least.  And very thick with neatly trimmed hair. An absolutely perfect cock. I couldn’t wait to get it in my mouth. But first, a lot of teasing!  It must be very frustrating to have a hard cock when you can’t touch it. And even worse when you have a hot girl in front of you wearing just a bra.  I couldn’t wait to make it even more exasperating!

Part three… Duh!  How much more fun can a hot girl and this handsome helpless hottie have?  Stick around and you’ll find out!