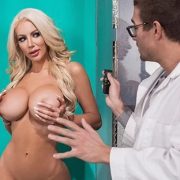 Needless to say, thoughts of kinky geeky scientist sex were far from my mind.

So today started like any other day, except that, well, I haven’t gotten off in over a week. It’s funny to say that. A lot of times, I look at a woman, laugh to myself and mutter underneath my breath that she really needs to get laid. Now, I’ve become that woman, and I’m too exhausted to even care.

With my hair pulled back in a severe bun, glasses on, and a lab coat, I feel myself getting frustrated more and more every day.

It’s not like I even have the time to think of naughty geeky scientist anyways. I have NO time whatsoever, considering I work all day and half the night.

The evening come about, and a few scientists on the Mars project ask me to go to a bar later tonight. I frown and almost felt my bun tighten. There is no way I can leave all this work behind. How can they even ask me to go! Especially men I’ve been snapping at due to the overload of work on my shoulders. We have a deadline for this report and it seems like I am the only one concerned. Don’t you hate being the one who does all the work at the office? And why is it that I don’t even care enough to release my frustration by engaging in geeky scientist sex?

“Who broke the fucking spectrometer this time???” I snap in the room, empty except for the lone scientist who’s stayed behind with me.

Their lack of response irritates me. The fucking rocks from Mars have me in a pickle. There is something in them that I have never seen before. Some organic matter, one with a molecular arrangement is baffling me. What the fuck is this – and why do I have to be the one dealing with it? Can’t I just finish my work and let some other scientist come across this abnormality?

Frustrated like I’ve never been before, I stomp over to the water cooler, wishing it was dispensing vodka instead.

I feel a presence behind me and turn around. It’s the man who’s stayed behind me in the lab, except that’s not Nerdy McFalley, as we’ve all nicknamed him, the one with the oversized glasses who checks out every pair of boobs that walk by – however rare they are.

This man is attractive. I’ve heard the few women in the lab making comments about how bad they want to fuck him. Up until now, the Mars project has kept me too busy to even notice. Now, as my eyes go up and down, I notice he looks like Dr. McDreamy from Gray’s Anatomy. What the other girls always pointed out to me was a cock that protruding from his pants.

“No, it’s bigger!” another had chimed in.

As he stands in front of me, I decide to actually look down. I almost drop the beaker that I’m holding. Thankfully I don’t. There are specimens in there from Mars that I’m desperately trying to break up.

I toss my glasses on the counter, looking over at the stud, thoughts of nerdy scientist sex invading my mind.

“I’m very busy,” I snap. “Was there something you needed from me?”

He laughs. “Well, I can tell you’re very stressed and I’d like to help you.” I look at the beaker. “No, not with the research we’re conducting. I would just like to… help you relax.”

Before I can react, Doctor Spencer pushes me against the counter, the damn spectrometer crashing on the floor. His hands grope me through my lab coat. Within a moment he tares off my clothes, sits me on the counter, and begins to explain the elements of rock. For some reason that turns me on, especially that his tongue pushes into my sweet cunt. It’s been so long since I’ve fucked! I know my pussy juices will be flooding his mouth within seconds.

“I have a rocket ship to take you to heaven,” he grunts, his cock out, pushing into my yummy wet hole. His cheesy line turns on the sexy nerd inside me even more.

This geeky scientist sex experience was out of this world – no pun intended! He thrusts deeper inside of me, my pussy splitting open from lack of use. I feel every vein in his dick plowing through me. Now I know why all the women in the lab want him. He is a mastermind when it comes to taking a woman to another planet. Screaming, he blows a load of rocket fuel deep inside of me, telling me that next time my project is late, he’s traveling to Uranus.