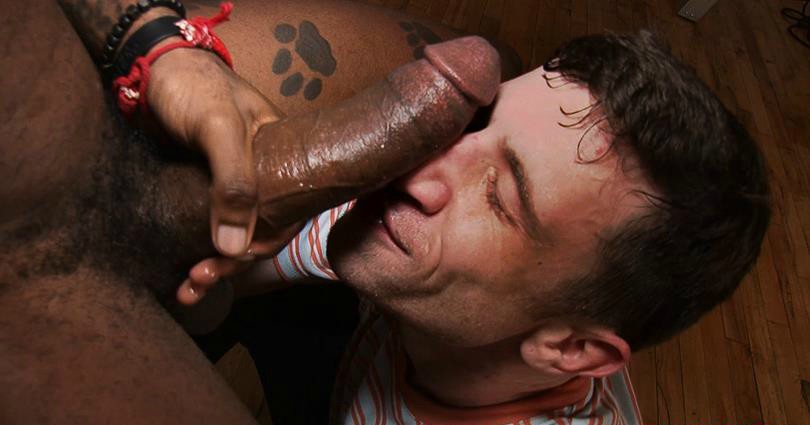 I invited him out to the bar, tempting him with free drinks all night. He brought one of his stupid friends, which almost ruined my careful planning! But around 1:30am, just before closing, I told him he needed to ditch his friend so we could have some fun after hours. And so he did! I’ve never seen a guy ditch his bromance partner so fast because he thinks he’s gonna get to fuck a pretty girl! Too bad for my brother, really, since he’s not going to be fucking me.

Soon it was time to close up and go to the back room. My brother is in the know about myself, Davon, and our after hours back room activity. I took him by the hand and led him to employees lounge once the last door was locked. He was surprised when he walked in and Davon was calmly sitting in a chair – completely naked… stroking his long, hard, black shaft. When my brother walked in he didn’t stop jerking that huge, ebony cock – he just smiled at him casually and kept on working it. My brother looked at me questioningly, not sure what was going on. He was about to find out.

I explained to him that he’s been behaving and whining like a little bitch lately, so now he’s gonna get fucked like one, with a big fat black cock! His eyes widened, and he looked back to Davon, and that huge meaty dick in his hand. He swallowed hard and said no, he wasn’t doing that. I looked at him in that way he can’t resist. I put my sexy pout and asked him, “Doesn’t big brother wanna make his dirty ‘lil sis happy?” He just stared at me, shaking his head back and forth in a “no” gesture – which just made me laugh even more. We BOTH knew he would end up doing whatever I wanted.

If I wanted to see a little forced bi action, then that’s what was going to happen!

I cooed at him sweetly, telling him I wouldn’t make him take that big cock in his ass tonight. (He’s always been terrified at the thought of having a dick in his ass; let alone a huge dick like Davon’s!) If he will just get down on his knees for his ‘lil sis and put that big black cock in his mouth, she’ll be happy! Reluctantly he sank to his knees, and Davon came over  and stood right in front of him. I took his BBC in my hands, stroking and making him instantly bigger and harder. My brother couldn’t help but stare in admiration. I know he was wishing right then that HE had a dick like that to use on me! (His is a perfect fit, but of course I’m not telling him that right NOW.)

He was pretty well drunk, my brother. I was surprised I had forced him to even this point; just being down on his knees in front of another guy’s cock! As I put my hand lightly on the back of his neck and pushed forward, he resisted slightly. His mouth was open though, and Davon took advantage of  his attention being focused on me, and he slid that monster cock right into my brother’s mouth before he knew what happened! He tried to pull back, but ‘lil sis’s hand on the back of his head was firm. No getting away for him! I pushed his mouth down slowly, inch by inch, until he was holding most of it in his mouth.

Davon’s hips started bucking forward, and next thing you know – my brother was sucking his first dick! A big black one at that!

At first he was choking and gagging. But his dirty ‘lil sis kept whispering in his ear. I told him how hot he looked with that huge cock in his mouth; how much it turned me on; and how hard I was going to fuck him when we got home and were alone tonight.

Was it my imagination? Or was he downing that cock a little more eagerly? He had a look of enjoyment on his face! I heard a moan deep in his throat as Davon pushed all the way in and he took ALL of him into his mouth. This was supposed to be forced bi! Was he…. liking this???

Does my brother have a secret bisexual fetish? I like girls, so maybe it runs in the family,
and he secretly yearned to be forced to take the next step!
Call one of our Hot Phone Sex Girls to live your own bi fun!