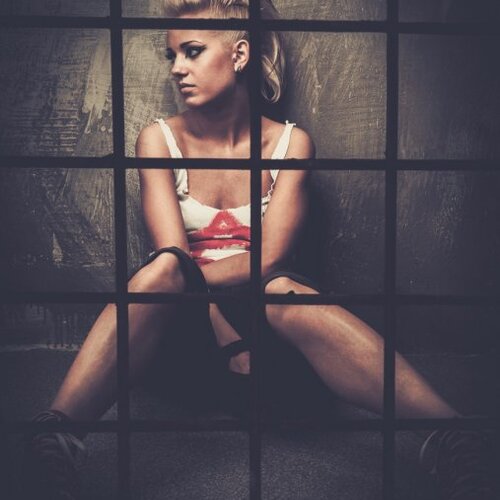 Being arrested for public intoxication in Paris was not fun, at first, anyway. My friends and I had a little too much fun and were being too disruptive, I guess. Or, maybe the french police officer that arrested me had some naughty plans in mind when he saw my small frame and huge tits. I’m sure he knew he and the four other officers at the jail would love to run a five guy train on me.

Since I speak fluent French, I was able to beg and plead with the officer not to arrest me. I even tried to flirt and promise to behave but now I know that probably worked against me. He knew how desperate I was not to spend the night in a French jail. He probably realized I was the perfect girl to run a five guy train on.

In The Holding Cell

Separated from my friends, I sat sad and alone in a cold holding cell, on the verge of tears. Then the officer who arrested me came to check on me. I stood up as he approached the bars, hoping he would set me free. To my surprise, he entered the cell and approached me, eyeing my body in my snug white dress.

In French, he told me he hated to see such a beautiful girl locked in a cell. Then he asked what I was willing to do to get out. “Anything,” I said, desperately. “Anything?” he asked as he slowly pulled down my dress, my double D bare tits bounced out. I wasn’t wearing a bra that night or panties. He squeezed and bounced my tits together, then, making eye contact with me, sucked on each nipple delicately. My clit tingled as his tongue flicked gently on each sensitive nipple. I let my head roll back and let out a soft moan.

That’s when I noticed four other guards standing behind the bars of my cell, watching. My arresting officer told me they wanted to run a five guy train on me. And if I didn’t put up a fight they would let me go. He probably thought I would refuse. But, he had no idea he was talking to a kinky French whore.

Yes, Run a Five Guy Train on Me!

A slut’s dream come true. I get to be fucked by five hot guys in uniform and not spend the night in jail. What more could I ask for at that point?

“Yes, please,” I told him and the four other guards entered my cell. They looked so hot in their police uniforms. If had panties on they’d be soaked. I stripped off my dress. Then waited, naked and ready to fuck. Their hands groped all over my body and pulled at my long blonde hair. Then, one of them pushed me down on the bench on all fours. A chorus of zippers pulled down and suddenly, a huge cock entered my tight pussy. I pushed back against him and we fucked hard while the other guys warmed up their cocks.

Like they promised, I was set free. But I told them I was up for round two later that night.

Do you and your friends want to run a train on me? Call me for some naughty phone sex!

One Reply to “Five Guy Train: My Crazy, Wild Night in a French Jail”