Fingered by a Stranger in a Crowded Club ♕ 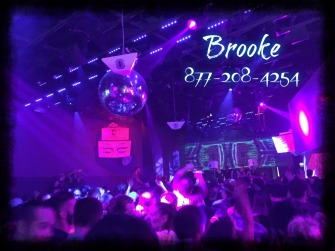 I got fingered by a stranger on the dance floor.

I never thought I would be fingered in such a public place but it was hot as fuck! The club was packed but that didn’t stop me and my friends from dancing away. We were shaking and grinding our asses to the music when I felt someone come up behind me. He put his hand around my waist and pulled me into him as he started moving with me to the beat.

The man could definitely dance! I didn’t even bother turning to look at him I just kept dancing letting him guide my body. Our bodies fit together perfectly. It didn’t take long before I felt the stiffness of his cock pressed against my ass. The way his hands roamed over my body as we danced mixed with the stranger’s arousal had my pussy dripping wet.

I could feel his breath on my neck just before his lips made contact on my skin. I reached my arm up and placed my hand behind his neck holding him tightly to mine. My ass moved harder against him as the tingles of my arousal spread throughout me.

He slid one of his hands down into the waistband of my skirt and started to rub my clit. My eyes shot open and I quickly looked around to see if anyone could tell that I was about to get fingered on the dance floor. It was so crowded that I would be surprised if anyone could even tell that his hand was down my skirt in the first place.

He kept me dancing and moved his fingers to the beat of the music.  My pussy pooled wetness. There was no denying how turned on I was and the fact that I was getting fingered in a very public place just hand me turned on even more. He slid one finger in and then another. He fingered me with his two fingers as we continued dancing. I never let on to anyone around me that this was even happening.

The feeling of pleasure grew stronger and stronger. I couldn’t hold it in anymore. My orgasm took me over and I started cumming all over the strangers hand. He fingered me for a little bit longer but slowed it down just enough to drive me crazy. His fingers slid from my pussy and before I could even turn way the had left. I still have no idea who it was that fingered me on the crowded dance floor but it was one of the hottest experiences of my life!! Give me a call and let’s talk about some of your hot experiences too.